You are at:Home»Current in Carmel»Carmel Community»Carmel unveils mural in Sophia Square designed by San Francisco artist

A mural titled “Around Town” by artist Jessica Eastburn debuted Aug. 13 at Sophia Square. (Photo courtesy of the City of Carmel)

The City of Carmel unveiled a new mural at ​Sophia Square Aug. 13 during the monthly Meet Me on Main gallery walk. The mural, “Around Town,” was voted the winning submission in a public art mural contest sponsored by the City of Carmel and the Indiana Arts Commission. 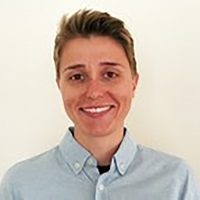 The mural has been placed inside the lighted interior entryway steps away from the Monon Greenway and the courtyard at Sophia Square. It is visible through the windows in the breezeway between Monterey Coastal Cuisine and Pad Thai restaurants.

The mural is by San Francisco artist Jessica Eastburn, whose work was a finalist among more than a dozen submissions received from across the U.S. A public vote selected Eastburn’s mural as the winner.

The colorful mural uses symbolism to pay homage to noteworthy aspects of Carmel and Indiana. Some of the symbols are:

“To design the mural, I first researched all that I could about Carmel. A design motif I settled on early was the circle. The circle kept creeping up in things I wanted to include in the mural: roundabouts, the first traffic light, tire wheels, lily pads and so on,” Eastburn said. “I attempted to pay homage to many aspects of what makes Carmel and Indiana great places to live. I hope I have captured some of that in the design. Most importantly, I hope the mural honors the community and spirit of Carmel.”

Eastburn is a professional artist and teacher in the Art & Art History Dept. at Santa Clara University. Her work has been exhibited in several states across the U.S. and throughout Northern California. Eastburn has created a variety of public art projects, including murals in several West Coast cities.