For Zionsville Community High School senior Will Modglin, it was an unexpected honor.

Modglin, 18, was recently named Swimming World Magazine’s 2021-22 Male High School Swimmer of the Year. Modglin won the 200-yard individual medley and 100 backstroke at the IHSAA state finals in February. He also won both at the 2021 state meet. 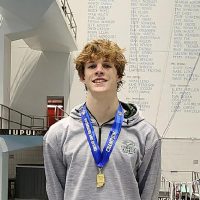 “I was definitely surprised by (the honor) because I knew there are a lot of really stout high school swimmers this year,” Modglin said. “I knew I had some tough competition going in. It was an honor because there are so many great swimmers who have been named that. To be able to follow in their footsteps is really cool. To be named that is really humbling.”

Modglin is the first boys swimmer from Indiana to earn the annual award. Swimming World based the award on Modglin being ranked No. 1 nationally in the 100 backstroke and No. 3 in the 200 IM.

“It was a matter of training really hard,” said Modglin, who has committed to swim the University of Texas. “I hadn’t really been setting any (personal bests) up until this meet. It was a relief to knock down some of the best times from when I was 16.”

Modglin said he was motivated after failing to make the U.S. team for the Junior Pan Pacific meet at the trials in April.

“I wasn’t really able to come through at the meet, which is really disappointing,” Modglin said. “Thankfully, I was still able to compete in a meet for (Team) USA in Canada (in June).”

“After Trials in June, I just mentally checked out,” Modglin said. “I was like, ‘I’m done. That’s enough swimming for me in the summer.’ I went on two vacations where I couldn’t swim.”

Now, Modglin is ready to take some time off.

“It feels like it’s time for a long-awaited break, probably until close to the start of high school season,” Modglin said. “I think I’ll be back in the water in September, maybe sooner.”

Modglin said his goals for this season’s IHSAA state finals are to improve his times.

“I want to go into the (state meet) and really have a better meet than last year and improve from prelims from finals instead of dying right after prelims,” Modglin said. “I want to improve my endurance and change my approach to how I came into the meet.”