You are at:Home»Current in Zionsville»Zionsville Cover Stories»Rap artist: Zionsville artist’s work has drawn attention from some of the music industry’s biggest names

Zionsville resident Reese Rowe was born to create. He still remembers when he sketched Leonardo – the katana-wielding reptile from “Teenage Mutant Ninja Turtles” – and got a positive response from his peers when he was in third grade.

“It’s almost like an adrenaline rush when you show someone your artwork and they’re amazed by it,” said Rowe, who has since painted artwork for a variety of celebrities, including rapper Cardi B.

Rowe, who owned his own store for approximately six years before closing it permanently during the height of the COVID-19 pandemic, still earns a part-time living as a commissioned artist.

Despite having to shutter his store, Rowe – who also paints vehicles for an auto dealership – hasn’t lost his passion for creating art.

As a child, Rowe was surrounded by two things: art and music. He said music was always blaring in the background when he was a kid. His uncle liked jazz, and his mother liked rhythm and blues.

When he wasn’t listening to music, Rowe was studying the graffiti he saw on television and in music videos. He especially liked the artwork featured in old hip-hop videos. 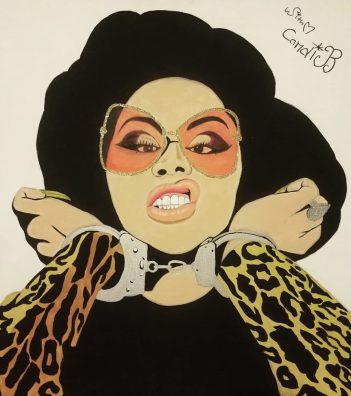 A painting that Reese Rowe had Cardi B sign when he met her in 2016.

It was that love for art and music that inspired Rowe to open his own shop. In 2016, one particularly noteworthy customer walked through the doors: Kanye West’s tour manager. The rapper was in town and would be performing the following evening. The tour manager wanted to know if Rowe could have a piece ready for the following night.

He rushed home and painted for eight hours.

The opportunity to paint a piece for West gave Rowe the chance to do a little work – again in 2016 – for another famous rapper: Belcalis Marlenis Almánzar, known professionally as Cardi B. Her debut album “Invasion of Privacy” won the Grammy award for Best Rap Album in 2019.

“It was actually more of a surprise for Cardi B,” Rowe said.

Rowe was able to attend the rapper and actress’s 2016 show with his daughter, where they met Cardi B and got a painting signed.

While those are some of his career highlights, Rowe has also experienced challenges. His store, which was on 10th and Lynhurst, closed because of the pandemic.

“I didn’t want to keep paying rent for a space I wasn’t using,” he said.

Even though his store is shuttered, Rowe keeps his messages on Instagram open. He conducts most of his business through his social media account, but even that can be a challenge. Rowe said marketing his work on Instagram is a big-time commitment. He doesn’t want to get caught up in the endless stream of likes and comments. He would rather focus on something more important.

“My family comes first with anything,” Rowe said.

His wife, Dawn, teaches sixth grade at Zionsville West Middle School. She got Rowe to create personalized nameplates for several of the staff. That way, when a student is meeting a new teacher, he or she gets a feel for their hobbies and interests. Rowe said he has been doing the nameplates for the past five years.

The teacher nameplates are family friendly, but Rowe doesn’t hold back when it comes to edgier pieces either.

“I have paintings that I probably can’t even show to the public,” he said. 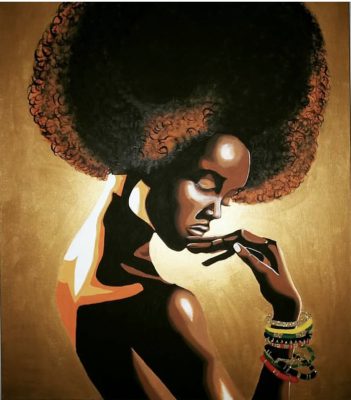 A painting done by Rowe.

Even though black artists are becoming more accepted, Rowe believes it can still be difficult. He said a major concern is offending too many individuals.

Aside from paintings, Rowe also specializes in custom clothing like jean jackets and shoes. He has dabbled in ceramics and sculpting as well.

He became interested in customizing clothes when he kept seeing people wearing the same white Nikes.

“What can I do to freshen these up?” Rowe said.

He enjoys doing custom work for clients because it is an opportunity to bring their visions to life.

When Rowe isn’t working on his art, he works at a car dealership (which one?) – painting cars.

A hashtag Rowe frequently uses on social media is #artdontstop.

Neither will he, especially because after all these years, creating still gives him an adrenaline rush.