You are at:Home»Current in Noblesville»Noblesville Community»Athlete of the Week: Senior midfielder gets kick from winning, lifting teammates

Noblesville High School senior soccer player Ava Bramblett has been a crucial part of the team’s success the past three seasons.

“Ava has had one of the most storied careers of any Noblesville High School athlete, two state championships, three conference titles, and yet, she doesn’t rest on these laurels,” Noblesville girls soccer coach Mike Brady said. “Every day, she wants to make herself better and the team better. We wouldn’t have had the success we’ve had without her. But she would be the last one to think that. Again, it’s about team and being a part of creating a winning culture.” 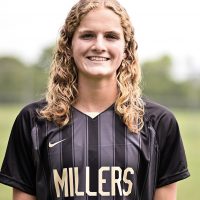 Brady said Bramblett, a midfielder, makes those around her better.

“As a leader of this team, she elevates her teammates every day, whether it’s in a game, at training, or in life, which is a special gift, when so many people put themselves first and foremost,” Brady said.

Bramblett has 32 goals and 16 assists in her three seasons.

“Ava sees the game in a way that most players do not, and that’s not just at the high school level, it’s players at any level,” Brady said. “She sees moments on the field before they develop and places herself in the best position. She can anticipate what a teammate is going to do even before they do it. Her creative thinking ability and vision on the field is amongst the best I’ve ever been fortunate enough to coach.”

The Millers won IHSAA Class 3A state championships in 2019 and 2020. They finished 16-1-1 last year, losing in the regional final. That snapped a 55-game unbeaten streak.

“Our main team goal this year is to win a state championship, but in the process, there is always the goal of winning conference as well as going undefeated,” Bramblett said. “A goal I’ve personally always wanted to achieve is Miss Soccer, but more importantly, I want to be a leader and someone who makes an impact in every game.”

Bramblett said one of her biggest improvements has been becoming more effective with either foot.

“I’ve spent a lot of time making sure that I can use both feet equally, so that even if the defender forces me in one direction, I can easily go either way,” she said.

Bramblett, who plays for Indy Premier during the club season, has committed to sign with Ohio State University.

“Ohio State has a very competitive program that has a good chance of competing for a national title each year,” she said. “Academically, it is one of the top schools in the nation for what I want to do. I also really liked the coaches and the feel of the campus.”

Bramblett wants to become an occupational therapist, so she said she will most likely major in kinesiology or biology.

Hobbies: Working out, shopping, spending time with her family