You are at:Home»Current in Fishers»Fishers Community»Fishers High School swimmer set for break after national title win

“I haven’t had a full break since before COVID,” Ramey said. “Even during COVID (lockdowns), I swam in a backyard pool, which wasn’t like practicing. My last short break was early October (2021) when I took a few days after I get back from the World Cup in Europe.” 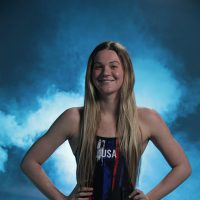 Ramey planned to take at least a week off after capturing the 200-meter backstroke title in 2:09.80 at the Aug. 3 U.S. Junior National Championships at an outside venue in Irvine, Calif. Her personal-best time is a 2:08.90, set during the U.S. Olympic Trials.

Ramey, a University of Florida commit, said she was confident going into the finals after prelims.

“I knew I had more left to go faster at night,” she said.

Ramey competed at the NCSA Swimming Championships in late July at the Indiana University Natatorium in Indianapolis.

“I only swam the 200 backstroke just to get a little tune up in, and it went pretty well for not being fully rested,” said Ramey, who won in a time of 2:10.64. “It’s a pretty competitive meet, but not as competitive as Junior Nationals. I wanted to get an indoor meet in before I went outdoors.”

Ramey is typically better at long course because she doesn’t get as much push off the walls.