You are at:Home»Current in Zionsville»Zionsville Community»Current intern wraps up busy summer

Zionsville resident Will Riddell recently began his senior year at Taylor University. But before classes resumed earlier this month, he completed an internship with Current Publishing that was like no other for a Current intern.

During what became a very busy summer for Riddell, he did everything at Current from writing and reporting stories to pitching stories to taking pictures and– in his final weeks — serving as interim managing editor for Current in Zionsville. 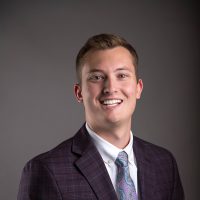 No other Current intern has ever served as an interim managing editor.

For Riddell, the internship was an opportunity to pursue his passion for storytelling and his overarching goal of pursuing journalism as a profession. He is a journalism major at Taylor and is the editor of the campus newspaper.

“Everyone has something about them that other people would find interesting,” Riddell said.

After being reared in Zionsville and attending a private school, Riddell said he sought a change as he prepared for college. So, he left Indiana and enrolled at Arizona State University. But he soon discovered he didn’t like the school’s party culture and lack of community, so he moved back to Indiana after his freshman year at ASU and enrolled at Taylor University, where he studies multimedia journalism.

Before joining Current, Riddell landed an internship at WISH-TV in 2021. He said he feels in his element as a journalist and enjoys telling people’s stories.