The Palladium prides itself in being a “world-class venue,” but its aging technical equipment is causing the 1,600-seat concert hall to miss out on booking key performers and causing other headaches, according to Jeffrey McDermott, president and CEO of the Center for the Performing Arts.

“Ringo Starr has long been on our list to bring to the Palladium. We have tried to get him two times,” McDermott told the Carmel City Council on Sept. 19. “We can offer him his money, but we cannot offer him the sound system he requires. Without it, we simply cannot attract him.” 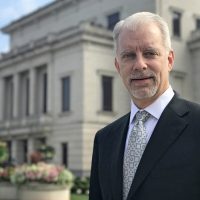 At the meeting, McDermott requested the city add approximately $1.5 million in upgrades to the Palladium’s sound and lighting systems and add outdoor digital signage to a list of projects eligible to be funded through redevelopment district bonds approved by the council in 2021. Those bonds included $1.5 million for a light show on the Midtown water tower, but that project has since transformed into a $2.2 million light show on the exterior of the Palladium to be funded by the Carmel Redevelopment Commission.

McDermott said a new sound system will cost between $634,000 and $820,500. He said the existing system has been in place since the building’s original system was reconfigured a few months after the Palladium opened in 2011.

A new lighting system is expected to cost between $615,000 and $765,000. The Palladium’s existing system is original to the building except for a dozen lights added later. Approximately 60 intelligent lights, which can be programmed to swivel, need to be replaced, at a cost of $8,000 to $10,000 each.

“The PA system and lighting system are critical needs. We really are beyond the reasonable life for both of these,” McDermott said. “I don’t think that has been noticeable to our patrons or the public, but it will be soon if we’re not able to update those.”

McDermott is also requesting approximately $150,000 for a six by 12-foot digital exterior sign, which would only include the sign itself and not a decorative casing around it. The sign is proposed to be placed north of the Palladium along City Center Drive to alert those passing by about upcoming shows and to promote sponsors.

“To my knowledge, we are one of the very few performing arts centers in the country that doesn’t have exterior electronic signage,” McDermott said.

The council sent the funding request to its finance committee for further discussion. A committee meeting date had not been announced as of press time. Councilor Jeff Worrell asked McDermott to be prepared to speak at the committee meeting about why the city should fund the upgrades, as opposed to using other forms of funding.

McDermott briefly addressed Worrell’s question at the council meeting, saying that the upgrades are a capital expense that should be covered by the building owner, the City of Carmel. He described his organization as a property manager.

“No property manager is going to be paying for the capital improvements, adding on a wing or putting in a new HVAC system,” McDermott said. “

If the projects are funded by the city, McDermott said he expects installation to occur in the summer of 2023. Scott Hall, director of communications for the Center of Performing Arts, said other funding sources have not been identified.

“Five members of the council sponsored this resolution, so we are confident it will pass,” Hall said.

Sponsors are councilors Adam Aasen, Laura Campbell, Sue Finkam, Kevin “Woody” Rider and Worrell. Councilors are not required to vote in favor of items they sponsor but typically do.