You are at:Home»Current in Carmel»Carmel Education»Community split on impact of charter school proposed in Carmel

Community members from Hamilton County and beyond shared their thoughts on the Valor Classical Academy charter school proposed in Carmel at a public hearing held Sept. 21 at Holiday Inn in Carmel.

Nearly 30 speakers provided feedback, with more than half offering support for the school. Those in favor of the school highlighted the benefits of school choice and a smaller campus, while many of those in opposition expressed concerns about its curriculum coming from the Barney Charter School Initiative, a program affiliated with the conservative Christian Hillsdale College, which has helped launch charter schools across the nation.

Grace Schools Charter Authority, which Valor has asked to serve as the school’s authorizer, organized the meeting, a step required by state law to give the public and officials from the affected school district a chance to weigh in. GSCA is expected to make a decision on whether to authorize Valor, which aims to open for the 2023-24 school year, in early October.

Charter schools are public, meaning they are tuition-free and receive thousands of dollars from the state for each student that enrolls. CCS receives approximately $6,800 per student in state funding and loses the same amount when a pupil enrolls elsewhere. 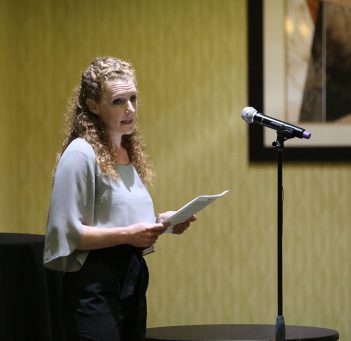 Holly Wilson, a co-founder of Valor Classical Academy, provides an overview of the school and its mission. (Photo by Ann Marie Shambaugh)

Holly Wilson, a Valor co-founder, presented a short overview of the charter school to begin the meeting. She said charter school laws in Indiana aim to give parents – and their tax dollars – more freedom and choice.

“When parents choose Valor, they’re essentially voting directly for Valor, which could be considered the essence of taxation with representation,” Wilson said. “The taxpayer gets to choose exactly where their tax dollars are going.”

CCS School Board President Katie Browning spoke on behalf of the district. She asked GSCA not to authorize the charter school, saying that “the loud few should not drown out the highly satisfied majority” in one of the state’s most successful districts.

“A handful of people have the potential to impact the education of thousands. This charter authorization has real world consequences in our classrooms. The reduction of public funding could mean fewer teachers or larger class sizes. It could lessen opportunities and reduce extracurriculars,” Browning said. “Also, what amounts to a national chain of charter schools can open a franchise in Carmel, Indiana, and try to duplicate systems that we already have and collect more taxes off the top.”

During the public comment portion of the meeting, Jackie O’Keefe, a mother of four, said she moved to Carmel for the public schools but that they did not live up to her expectations. She said that some families are unable to pay for private school and that Valor would provide a needed local option for those seeking an affordable alternative to traditional public school.

She – and others – took issue with those who oppose Valor because of its financial impact on CCS.

“My children, they’re not ATM machines,” O’Keefe said. “They are the future of my community and this world.”

“(With Valor), I see something that feels like politics,” Tomaska said. “It’s really upsetting to me as a parent that we want to divide our community rather than bring it together and start working together on improving the great things we already have at Carmel Clay.”

Spencer Giacalone is new to the area and the parent of two children in CCS, and he said it’s been a good experience so far – at least with teachers at the campus level. He pointed to the district’s accolades as mentioned by CCS officials earlier in the meeting as reasons the district should not feel Valor is a threat.

“If the quality is there, I’m not really sure what you’re worried about, because then no one will go to the charter school,” he said. “People will either vote with their feet or not.”

GSCA is accepting feedback about Valor through an online form through Sept. 23. Access the form at valorclassicalacademy.org/upcoming-events/public-hearing-for-valor.