The musical centers on struggling artists in Lower Manhattan’s East Village. Two of the characters are HIV positive and another has AIDS.

Civic Theatre Executive Artistic Director Michael Lasley is directing the rock musical, “Rent,” and his wife, Marni Lemons, is the assistant director. Civic’s production is set for Oct. 7-22 at The Tarkington at the Center for the Performing Arts in Carmel.

“It’s a seminal piece of theater for people of a certain age,” Lasley said. “COVID brought up other epidemics in my mind, and the AIDS epidemic has been going on since the early 1980s. While we’ve made a lot of progress, it still exists. There are thousands of people who die from AIDS every year. It’s far more treatable if you are in situation where you can seek out treatment. It’s still a serious health issue in the world. Many of the characters are HIV positive.”

Being in the artistic world, Lasley said he and his wife lost many friends because of the AIDS epidemic in the early and mid-1990s.

“It seemed like we were going to more funerals than our parents and grandparents because it was taking so many people from the theatrical and artistic world,” Lasley said.

Lasley said the musical, which debuted in 1996, ran 13 years on Broadway. The composer, Jonathan Larson, died at age 35 of an aortic dissection on the night of the off-Broadway opening for “Rent.”

Lasley said Civic Theatre presented a concert version of it in 2010.

“It was a bigger cast, but less staging,” Lasley said. “We mostly concentrate on the music.”

“She is a powerful, bisexual woman who is a performer and protester,” Broadwater said. “It’s a role that is pushing me outside of my comfort zone, artistically, and finding the confidence to do some of these awesome, crazy things on stage (is challenging). Vocally, it’s a very good challenge for me. I’ve had a blast playing her. She is just so powerful and it’s awesome to get to play.”

Broadwater said she has been watching the musical for years.

“This is definitely the closest to a rock musical I’ve done,” she said. “But I’m a classic rock girl. I like all the oldies. One of my goals is to be in ‘Rock of Ages’ because that is one of my favorites.”

Broadwater loves the fact that the production is almost all singing, like ‘Les Miserables.”

Broadwater was first runner-up June 18 in the Miss Indiana competition. Auditions for “Rent” were two days later. She told her mother she wasn’t going to audition at first.

“I was nervous and didn’t feel prepared on the audition day, and my mom said, ‘Just go do it, it will be fun,’” she said. “It wasn’t one of the most fun auditions I’ve ever had. I was glad I ended up going.”

Broadwater, a Ball State University musical theater major, is traveling from Muncie for rehearsals. So is fellow Ball State junior Julia Ammons, a 2020 Carmel High School graduate who plays Alexi Darling, among other ensemble roles, and is one of the two dance captains. 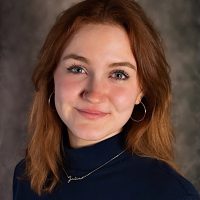 “I saw it once with the national tour and once with a smaller production,” Ammons said. “I loved both times I saw it and could envision myself being part of it someday.”

Ammons has performed in Civic’s Young Artists Program in the past. Her last production at Civic was “Elf” in 2019.

“This show has more maturity and intimacy work that we do with our intimacy coordinator, which is stuff I’ve worked with before but not in this depth,” Ammons said.

Ammons said she is used to performing in more traditional musicals, not rock musicals.

“Alexi talks really fast, and she is pretty annoying,” Ammons said. “She says a lot of phone numbers really fast, so there was a lot of memorization. But it came pretty easily once I started working on it.”