You are at:Home»Current in Zionsville»Zionsville Community»Athlete of the Week: Traders Point Christian quarterback sharpening his skills

He regretted it quickly.

“I chose not to play football my freshman year because I struggled with it through middle school,” said Simmons-Little, who lives in Pittsboro. “After watching my friends playing as brothers on the football field, I missed it and joined my sophomore year.” 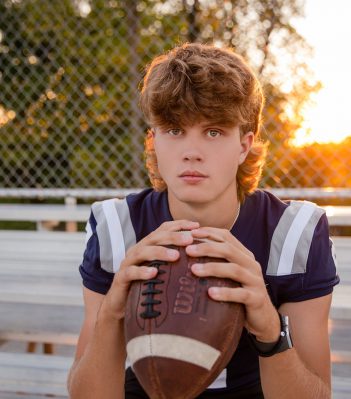 The 6-foot-2 Simmons-Little played receiver his sophomore year but was injured and missed much of the season. The senior now plays quarterback.

Last season, Simmons-Little completed 141 of 315 passes (44.8 percent) for 2,154 yards with 18 touchdowns and 18 interceptions for the Class A school in Whitestown.

In the first five games this season, he greatly improved his completion percentage by completing 108 of 174 passes (62.1 percent) for 1,592 yards with 18 touchdowns and two interceptions.

“My deep ball has improved the most,” Simmons-Little said. “My goal since last year was to be able to throw the ball deeper with more accuracy.”

His receivers deserve credit as well. Senior Phillip Moran had 34 catches for 519 yards and eight TDs in the first five games. Sophomore Colton Pollard had 26 catches for 446 yards and senior Eli Meals had nine receptions for 325 yards.

“I have solid receivers and our relationships have come easy,” said Simmons-Little, who also plays basketball for Traders Point. “We do little things to connect, such as (having) dinner together.”

Carnes, who is in his third year as Knights head coach, said he also is impressed with Simmons-Little’s footwork in the pocket.

“A lot of kids when there is pressure will just go down or throw a bad pass or just try to go ahead and run,” Carnes said. “Cooper’s footwork has improved to the point where he is always trying to complete the pass. He is going to use his feet to maneuver in the pocket and complete a pass. He’s thrown three or four touchdowns that way. I’m very impressed with his feet, very impressed with his attitude.”

Carnes said some NAIA and smaller college teams are showing an interest in Simmons-Little.

“My goal is to play at the highest level I can possibly get to and play consistently,” Simmons-Little said. “If that means more work, then I will put in more work to achieve the goal of playing college football.”

“The brotherhood and connections gained from football is why I want to continue playing,” he said.