You are at:Home»Current in Fishers»Fishers Community»Athlete of the Week: Fishers senior tennis player benefits from controlling emotions

Fishers High School senior Reese Knoderer used to be his own worst enemy.

That’s not been as much of a problem this season.

“He’s learned to control his emotions better,” Fishers tennis coach Dave Heffern said. “He’s really talented but he’s always kind of gotten in his own way. Now, he doesn’t get too down on himself when he makes a mistake. That was his problem before. He would make a mistake and get so down on himself that he would make two more.” 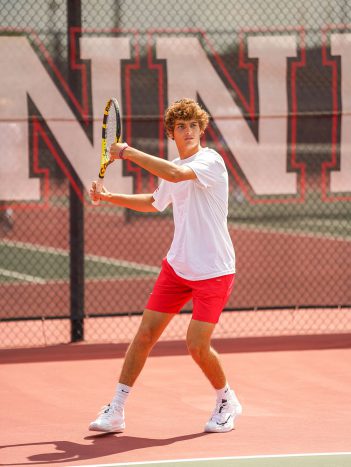 Knoderer captured the Hoosier Crossroads Conference tournament title at No. 1 singles for the first time by beating Hamilton Southeastern senior Rohan Golla, 6-4, 6-2. It was the first time Knoderer had beaten Golla.

“Our conference is so tough to win, I was proud of him last weekend,” Heffern said.

Heffern said Golla had beaten Knoderer in straight sets earlier in the season.

“I think I have improved the most in my mentality, which has decreased my level of play the most throughout my career,” Knoderer said. “It’s a frustrating sport, but if you can keep it under control, it gives you a greater advantage.”

Knoderer said it’s easier for Heffern to coach him when he’s level-headed.

“The experience of playing against No. 1 singles players is really great since there are so many high-level players,” said Knoderer, who had a record of 18-3 through Sept. 26. “It was very fun to be playing No. 1 since freshman year since I got to play really good senior players so young. This gave me so much experience starting out my high school career since I played many players that went on to play (NCAA) Division I In college.

Knoderer said he plans to play college tennis, but his goal is to play at the Division I level.

“I am trying to figure out where I want to go to college,” Knoderer said. “I plan on graduating from high school a semester early to get a better shot at a scholarship at Division I level,” Knoderer said. 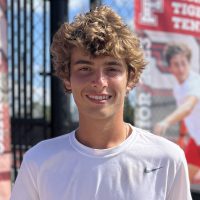 Heffern said he believes Knoderer has enough talent to play at a Division I level.

“Attitude is even more important in college,” Heffern said.

“But I had to choose between the two at 10 years old when I had a stress fracture in my lower back,” he said. “I also played soccer and basketball.”

“Practicing against my brother was definitely frustrating since we were very competitive toward each other,” he said. “It for sure pushed me to try and get better than him.”

Hobbies: Hanging out with family and friends, playing basketball