It’s not unusual to be a two-sport varsity athlete, but Park Tudor School sophomore Paige Dill is accomplishing that feat by playing on two teams with fall seasons.

Dill, a Carmel resident, has played soccer since before she began kindergarten and is now a starting center back on the Panthers’ girls team. She’s a rookie, however, on the school’s varsity football team, where she handles all the place-kicking duties.

She’s off to a great start in her football career, making 27 of 29 extra point attempts in her first six games, with the team going 5-1 to begin the season. Her first ever onside kick – recovered by Park Tudor – helped the Panthers complete a comeback win against Traders Point Christian School in early September, and she recorded her first tackle later in the month during a kickoff return against Cincinnati Country Day School.

Park Tudor football coach Spencer Summerville approached Dill about joining the team as a kicker this season after several of her classmates suggested she might be a good fit. Initially, Dill was hesitant, but after receiving encouragement from several other athletes, she decided to give football a try.

Her teammates have been supportive, Dill said, getting “hyped and pumped up” whenever she succeeds.

Summerville said Dill’s greatest asset as a kicker is her consistency.

“I know exactly what to expect from her when her leg meets the ball. That makes a huge difference in our ability to cover kicks and make decisions regarding field goals,” Summerville said. “She definitely has a strong leg, too, which is getting stronger as she continues to develop in the weight room, flexibility and maturing. So, it’s a blessing to have a player with her skillset, and that we can expect her to be around and even better for the next few years.” 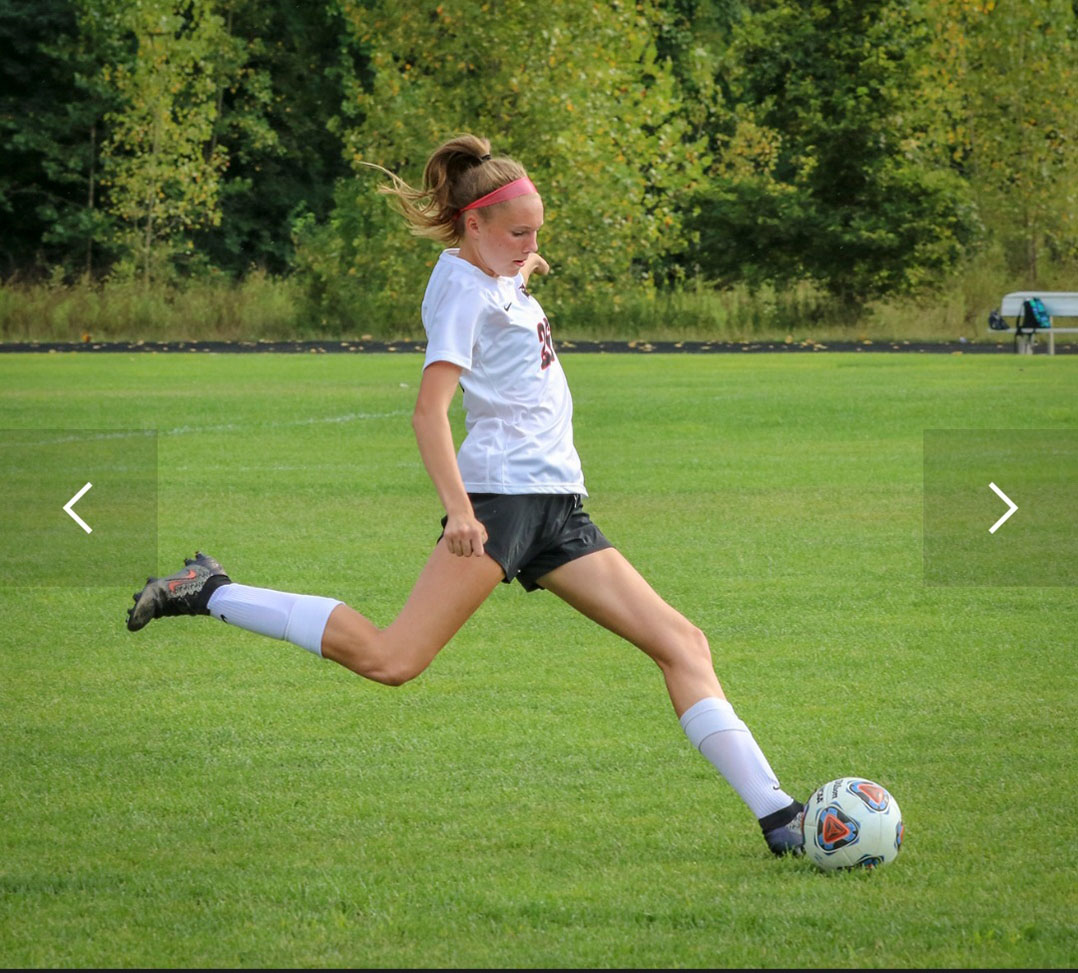 Paige Dill, a sophomore, is in her second season on the varsity soccer team at Park Tudor. (Photo courtesy of Katherine Dill)

Dill, who receives instruction from kicking expert Mark Hagee, said some elements of kicking are the same in soccer and football but that there’s less room for error on the gridiron.

Dill spends most of her practice time with her soccer team, especially now that school has begun. In the summer, she was able to dedicate more time to both sports. Only once so far this season has she had a soccer and football game on the same day, and she said her soccer coach, John Simmonds, gave her a rest in the second half of the game (which the Panthers were winning handily) to conserve energy for football.

Simmonds said he’s never coached a girls soccer player who split time with the football team before, although he has had a player compete concurrently in cross country. He said that Dill, who was the soccer team’s rookie of the year her freshman season, is committed to her teammates on both squads and to her academic career as well.

“Paige is a vital piece for both (sports) programs, as they have been ranked highly in the polls all season,” Simmonds said. “We are looking forward to seeing how both seasons end up in October.”

Dill said she wasn’t much of a football fan before joining the team, but she’s grown to love the sport and now watches college and professional games with a different mindset. She’s not sure yet if she’ll continue playing either sport in college, but she’s open to the possibilities.

For now, she plans to remain a fall two-sport athlete for the rest of her high school career. 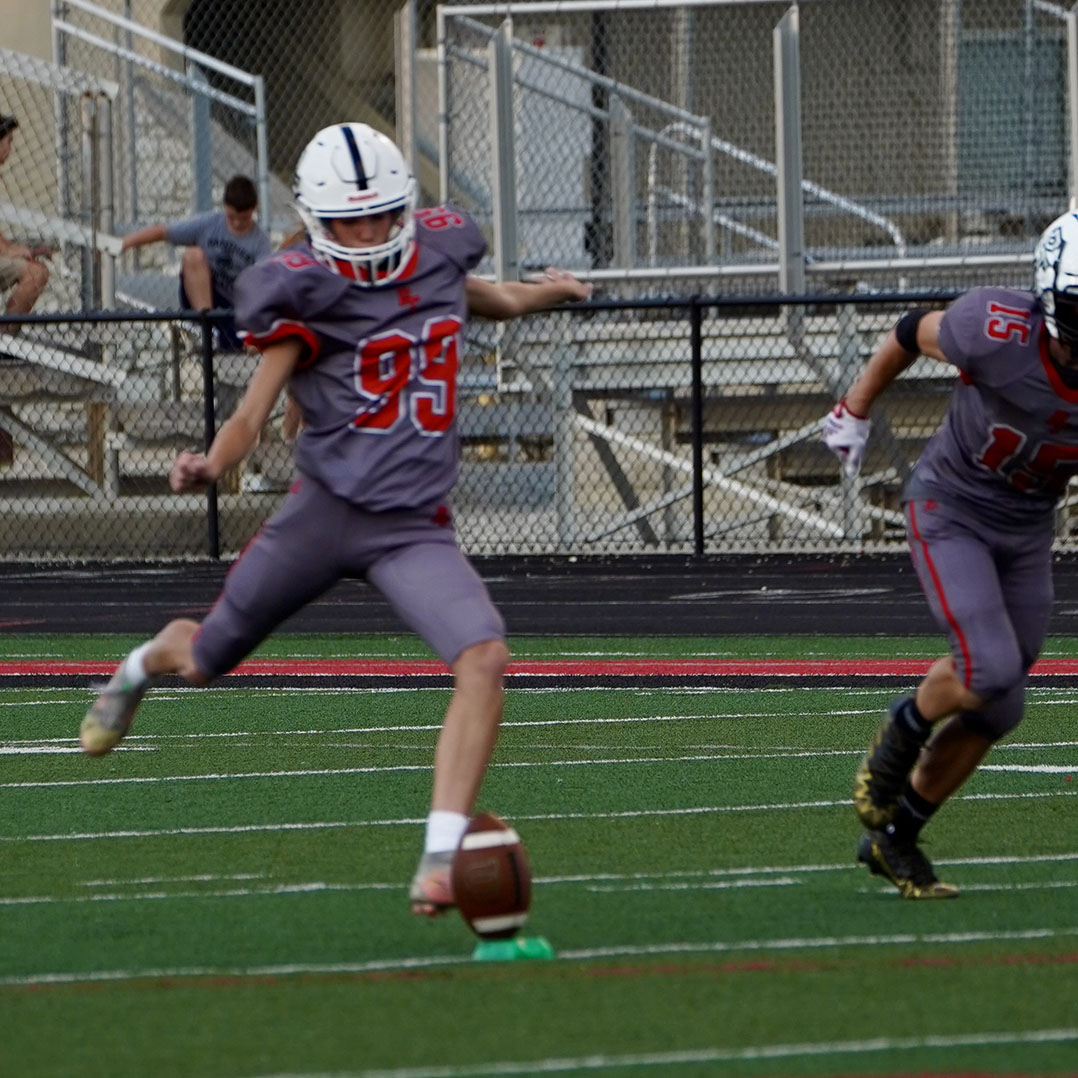 “I think it’s a huge benefit of our overall mission: to help grow 21st-century citizens and leaders,” Summerville said. “One of the historic failures of football is that it has perpetuated a culture of toxic masculinity and celebrated overly aggressive behaviors. I don’t want to suggest that we were not aware beforehand; however, with the inclusion of these phenomenal young women, we are presented with the opportunity to be more conscious about how we communicate and behave. We can be respectful, organized, efficient and effective in a better way.”

Dill said she has learned much through the experience, including the responsibilities of being a role model for some in her community.

“So many younger girls have told me, or their parents have told my mom, that they want to kick, too,” Dill said. “It didn’t really hit me until actually doing it that some of these kids admire it, and some people might think about doing something (like this) but they don’t do it because of gender stereotypes.”