The Lawrence Common Council met Oct. 3 in the Public Assembly Room of the Lawrence Government Center. The council approved a redistricting map and also approved a $70 million project. The next monthly common council meeting is set for Nov. 7, at 6:30 p.m.

What happened: The common council voted on an approved redistricting map of the City of Lawrence. 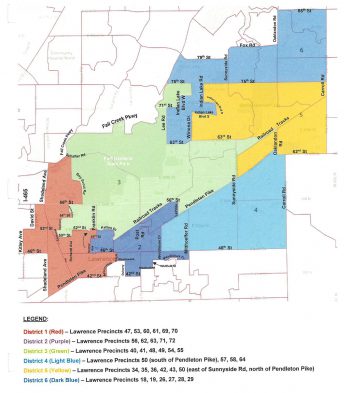 Redistricting map for the City of Lawrence.

What it means: The council first saw a presentation at the July 5 meeting. The new map cuts parts of District 5 and District 2, making both smaller, with District 6 taking almost half of District 5. This reconfiguration is done to ensure there is as close to equal population in each district as possible per the “one person one vote” law that states districts should be as near equal population as possible with the difference between the largest and smallest districts being no greater than 10 percent.

Rick Wells, who represents District 2, said he had never gone through the redistricting process and said the council should have taken more time to discuss the map and any possibilities of changing it before taking a vote.

“We were told that there was going to be an opportunity to ask questions, and my assumption of that would have been before the map was drawn,” Wells said. “(But we) didn’t have any input until after the map was presented to us, and then when a lot of questions were asked, we were then told by our council attorney that there were multiple maps that could have been drawn but, unfortunately, we just got that one map. I just felt that that map was being shoved upon us.”

What it means: The 5-story mixed-use building will include 204 residential units with 19,000 square feet of retail, office or other commercial space and a covered parking area that might be later converted into more retail space. The project will be paid for in bonds and residents will not see any increase in taxes. The developer, Keystone Group, bought the land from the Fort Harrison Reuse Authority for $10.

“I think this is a great project for one of the last few remaining large parcels at Fort Ben,” said council member Tom Shevlot, who represents District 5. “The whole idea behind establishing the Fort Harrison Reuse Authority is to seek out opportunities and projects that adds value to the property while maintaining the integrity of the original purpose, and so this particular project, in my opinion, fits perfectly within the scope of the Fort Harrison Reuse Authority as well as the needs of the community.”