You are at:Home»Current in Carmel»Carmel Cover Stories»Gravel warriors: Local cyclists take on challenge of The Rift 200K race in Iceland

A competitive cyclist for approximately 25 years, Matt Tanner started racing on gravel in the fall of 2021.

By July, the 48-year-old Carmel resident had competed in one of the most challenging and grueling races, The Rift Gravel Race in Iceland, a 200 kilometer, or 125-mile, race.

Tanner said much of the attraction of The Rift was the destination. Tanner saw a YouTube documentary on the event, which started in 2019.

“A buddy and I were blown away,” Tanner said. “That’s the coolest event I’ve seen in my life. There was a lottery to do it.” 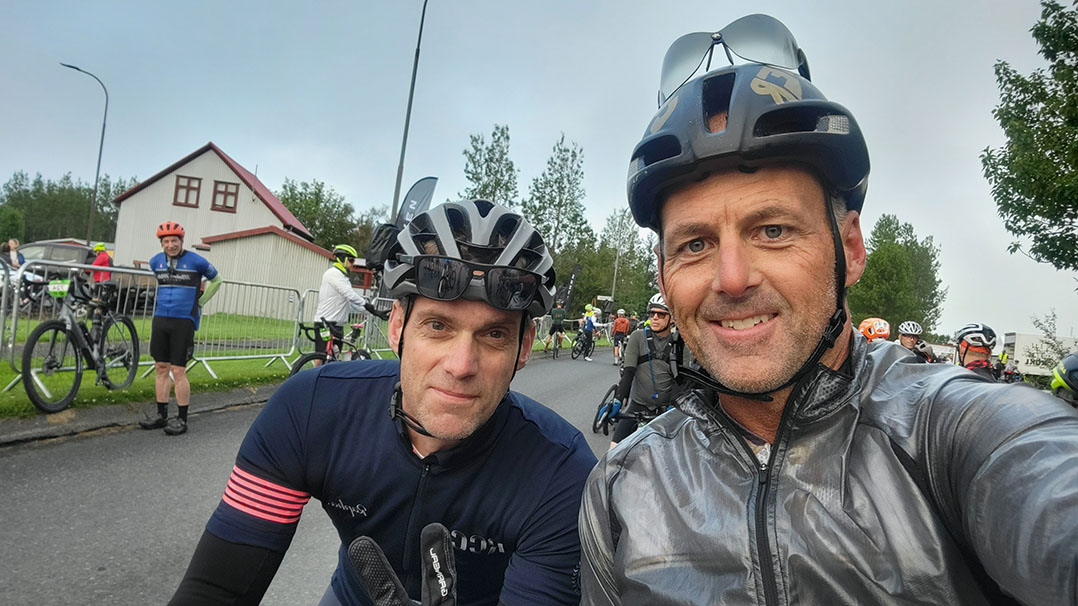 Rob Herzog, left, and Matt Tanner compete in the The Rift in Iceland. (Photo courtesy of Matt Tanner)

In 2020, the race was canceled because of the COVID-19 pandemic. In 2021, Tanner wasn’t able to get in. This year, Tanner and two of his Rollfast Cycling Club teammates, Steve Hershberger of Carmel, and Rob Herzog of Westfield, successfully earned spots.

“It was really just to do an event that was on volcanoes and glaciers, stuff you can’t do anywhere else in the world,” Tanner said. “When you race gravel, especially those that are 100 miles or more, it really comes down to who’s the best at handling their bike and those kinds of skills,” Tanner said. “Then who is the strongest, and the third thing is who has the most luck. There is always a pretty good possibility you’ll get a flat tire or you’ll have something on your bike break. When I finished the race in Iceland, I had a flat tire that sealed back up. We run sealant in our tires that hopefully seal up. I think my tire pressure was around 10 or 15 when I finished and when I started it was 40. It was flat but I was able to ride it to the finish. I saw a lot of people that were stranded on the side of the trail trying to get their bikes running again.”

Tanner’s strength helped him place 13th in just over eight hours in his 40-50 age group and 30th overall.

“Steve was in a shorter race, and I finished around two hours ahead of Rob,” said Tanner, who only stopped to refill his water bottle. “There are people there that are not racing it the way I was. They stop and take pictures and all that.”

Herzog said Tanner is an all-around strong rider in every cycling discipline.

“While there are some unique characteristics to competing in gravel events such as tire selection and bike handling on mixed surfaces, Matt’s training and experience will put him in the lead group of any event he enters,” said Herzog, who has been riding with Tanner for more than a decade.

Tanner rates The Rift as one of the top three races in which he has competed. The other two were road races in Rome, Italy, and San Diego.

Tanner’s first gravel race was the Harvest 50 in Zionsville in October 2021.

“I bought a bike, jumped in the race and enjoyed it,” Tanner said. “It’s different from what I’ve done in the past. I’ve done a lot of different disciplines of cycling. It’s a new, trendy race format.”

Tanner founded the Rollfast Cycling Club in 2012. There are 100 members with chapters in Carmel, Clearwater, Fla., Chicago, Boulder, Colo.,  Austin, Texas and Huntsville, Ala.

“I haven’t done mountain races in decades,” Tanner said. “I’m focused on the road, and then gravel is sort of secondary. There are more gravel races going on because it’s easier to put them on and you don’t have to close roads with traffic. There are less cars and they’re safer.”

Hershberger began competing in the major gravel races in 2019.

“There are a dozen around the United States and a couple around the world,” Hershberger said. “Those tend to be the big endurances races, like 125, 150 and 200 miles.”

Then a week after that, he was competing in the Gravel World Championships in Lincoln, Neb.

“It’s become my favorite form of biking by far,” Hershberger said. “You go to those majors and you build these friendships. This season I did six majors. Next year I’ve already booked seven of them.”

Hershberger already has booked his hotel room to return to The Rift in 2024 and plans to compete in the 200-kilometers.

“For me, it’s a priority,” he said. “There are a lot of people in Carmel that have more expensive extracurricular activities. I budget for this. It’s something my wife believes in, because it’s a healthy obsession. If you approach it right, it just eats stress. So it’s a good thing physically, emotionally and psychologically to do. It keeps life balanced and you get to see bucket list places in the world.” 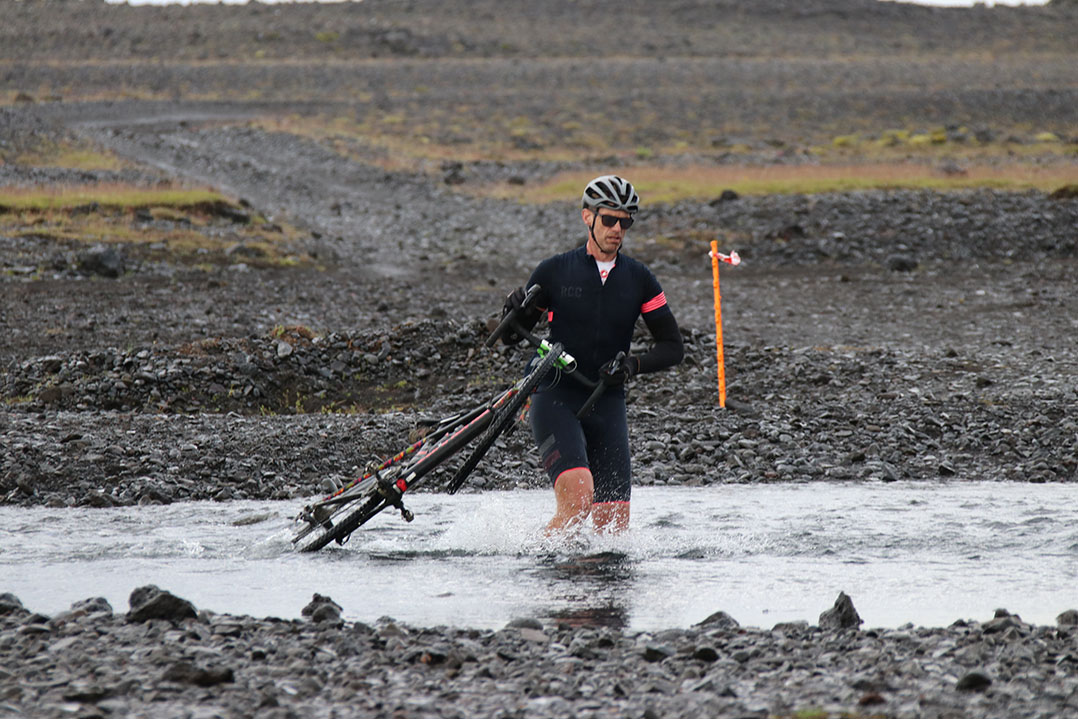 Rob Herzog pulls his bike out of water at The Rift in Iceland. (Photo courtesy of Matt Tanner)

Cycling is not only Matt Tanner’s passion, but his profession.

Tanner has been contracted by the City of Carmel to run all of the Bike Carmel events since 2016.

“We do kids rides and adult rides throughout the summer,” he said.