Riley Compton, a 2015 Carmel High School graduate, has been selected as one of three pilots for the USA Bobsled and Skeleton Federation team, meaning she will represent the U.S. in the World Cup competitions.

She learned of the achievement during a virtual call Oct. 10. 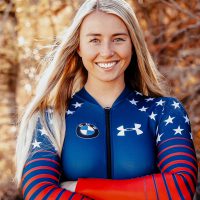 “When my name was announced it, was almost surreal,” Compton said. “I couldn’t believe it”

Compton began bobsledding in 2020, and soon aspired to make the national team. To be eligible, she needed to compete in five races on three tracks in two years. She accomplished this during her third season, racing in the U.S, Austria and Germany.

Since 2019, Compton has been an active-duty Marine. She’s stationed in Camp Pendleton in Oceanside, Calif., and she said the leaders on the base have been supportive and encouraging of her bobsled schedule and goals.

Compton said she is thankful to also have an outpouring of support from her hometown community in Carmel.

“I’m really thankful that I grew up in such a nice area with a support system back home,” she said.

Compton will compete in bobsled events in Canada, Europe and the U.S. from November to February.

She hopes to be the first female marine to compete in the Olympics and offered words of advice for others with big dreams.

“Anyone else who aspires to be an athlete or wants to continue, don’t tell yourself no and count yourself out before you give yourself a shot,” she said. “Don’t stop seeking opportunities and pursuing excellence. Doors will be open for you.”