You are at:Home»Current in Fishers»Fishers Community»Athlete of the Week: Hamilton Southeastern wide receiver produces big plays for top-ranked team

Hamilton Southeastern High School junior wide receiver Donovan Hamilton’s speed and improved mental game has made the difference for him this season.

The 6-foot-4 Hamilton had 41 catches for 680 yards and eight touchdowns for the Class 6A No. 1 Royals, who were unbeaten heading into the Oct. 28 sectional game against Homestead.

“I think I’ve made the most improvement this season in the weight room and in the mental part of the game,” he said. “Coach Kelly and (strength and conditioning coach Stephen Krzyminski) are always pushing me to go hard in the weight room. Also, back to last season, coach (David) Weitz, our offensive coordinator, was always on me about my mental state during the game. He told me during the offseason he wanted to see me improve that more than anything else, so that’s what I did. 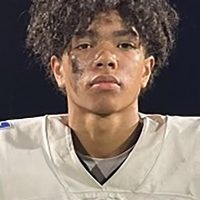 “My coaches in both football and basketball told me I need to keep my head up after bad plays and just keep working. It has helped a huge amount in my game.”

“The biggest growth this year has been his ability to play the next play,” Kelly said. “He has matured significantly as a player.”

It also helped that Hamilton has been healthy

“I broke my thumb (last year) and missed over half the season,” said Hamilton, who had five catches in 2021. “I didn’t get a lot of playing time when I came back.”

Hamilton said a big key to the team’s unbeaten regular season was – and is – its work ethic.

“We take no plays off in practice and always give 100 percent,” he said. “Also, obviously, our coaching staff being one of the best in the state (is key) because of how much time they put in to help our success.”

“I have definitely had more coaches reach out to me after our team’s success this season,” he said. “I hadn’t had any prior to the season due to my injury holding me back from playing last year. So, it’s great to finally get some exposure and show what I can do.”

“Basketball was my first sport,” he said. “I started playing at about 4 years old and never stopped. It was always my favorite sport growing up.”

Hamilton’s older sister, Amaya, was a 2019 Indiana Girls All-Star, playing on the Royals’ state championship team. She is a junior guard/forward at Duquesne University. Their father, Brian Hamilton, was a defensive tackle for Notre Dame.