Ashley Nicole Soprano has been waiting to give her fans a performance on a larger stage.

“I am most looking forward to giving all of my sponsors and fans the stage performance they have been begging for,” Soprano said. “For the last two years, I have been entertaining at charity events, retirement centers, Fishers Parks and private clubs. Traditionally, at the meet-and-greet after the show, people always ask me where I am performing on stage, so they can invite family and friends to a concert. ‘Holiday & More’ at The Cat in Carmel is this concert for all of these people who have been supporting my music career financially and as fans. 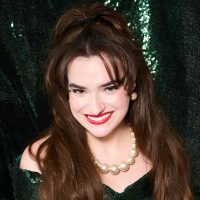 “I am also looking forward to meeting and thanking the fans who have been listening and following on social media.”

“I decided on a holiday show with holiday music because the holidays have a magical way of bringing people together in a spirit of love,” Soprano said. “Some of our best memories revolve around the holiday season and holiday music. All of the songs I’m singing at the ‘Holiday & More’ concert are my favorites. Perhaps my most favorites are the ones I have selected for my new ‘Holiday’ CD, which will be first available at the shows.”

Soprano said her music runs the gamut from opera to classical-crossover, contemporary pop and country.

“In 2016, I performed with Projekt:Opera directed by Hidetaka Niiyama and produced by Ji-Eun Lee Music Academy, (and played) the lead role in ‘The Elixir of Love’ as Adina. So, this show also featured musicians from the ISO, namely associate concertmaster and first violin Philip Palermo. The following year, I was under the same direction, with the lead of Rosina in ‘The Barber of Seville.’”

While attending Butler University, Soprano received a grant to write and produce three original contemporary pop songs and videos, which are available online, on YouTube as well as streaming platforms.

“Meanwhile, my current monthly shows feature tributes from ‘Phantom of the Opera’, ABBA, Patsy Cline, ‘50s ‘60s and ‘70s throwbacks, Songbook favorites as well as Broadway and classical-crossover,” Soprano said. “Whatever I decide to sing comes from my heart and is in my personal style, which has been described as stunning, lovely and sweet as well as giving goosebumps and bringing tears.”

Soprano is her professional name.

Soprano was born and raised in Fishers and lived there until high school, when the family moved to South Carolina so her brother could attend college there.

“It was in Charleston while homeschooling that I was afforded the opportunity to pursue my vocal and piano training, performing in several recitals as well as with the Charleston Symphony Orchestra Chorus,” she said.

She returned to Fishers to attend Butler University.

Soprano performed her October “Pumpkin Spice” show in the Indianapolis area. This month, she is performing her Thanksgiving “Classical-Crossover” show, in addition to preparing for her ‘Holiday & More’ concert and “Holiday” album release.