You are at:Home»Current in Fishers»Fishers Community»Athlete of the Week: Fishers High School senior grows as leader, on and off field

“The biggest improvement I made was becoming the very best version of myself as a leader,” Dunn said. “I grew so much as a vocal and passionate leader. My goal every day was to have everyone on the same page, fighting for the same goals.”

Dunn helped the Tigers advance to the Sectional 3 final Nov. 4 before losing to Hamilton Southeastern, 35-13. 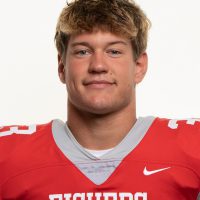 “Carson leads by example with his hard work and dedication to the program,” FHS football coach Curt Funk said. “Carson is explosive both running and catching the ball. Another high quality is Carson’s ability to block second-level defenders. Carson made his most improvements in his ability to catch the ball as a slot. Carson also made improvements in running the jet sweep in our fly series, getting the edge on a defense.”

“The team had improved so much from my sophomore year,” Dunn said. “We didn’t only improve on the field but also off the field. Our team chemistry was off the charts. We were a family that did everything together.”

Dunn is an outfielder for FHS baseball team as well, hitting .395 last season and earning second team All-HCC honors. However, Dunn said football is his favorite sport. He is committed to play on scholarship at Indiana State University in 2023.

“They reached out to me before any other school and stayed in touch throughout the entire recruiting process,” Dunn said. “They have showed nothing but love. There is no other place I’d rather be than Indiana State.”

Dunn plans to study business administration and finance at ISU.

Hobbies: Working out, watching sports, hanging out with friends, playing cards, and golfing.