You are at:Home»Current in Noblesville»Noblesville Community»Athlete of the Week: Guerin Catholic receiver has memorable season

“I’ve always been full on baseball and this season changed it all,” Fremion said. “I’m a lot more focused on football now.”

“We were pumped for the year, working all offseason with team bonding stuff,” Fremion said. “We knew we had something special.” 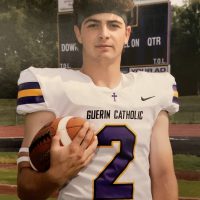 Fremion, who had 24 catches as a junior, said he had a huge connection with junior quarterback Ryan Zimmerman during the preseason jamboree.

“Zimmerman and I had a great three games,” he said. “I think going into Week 4, he was leading the state in passing yards and I was leading in receiving yards. I thought it was funny but really cool.”

Zimmerman was injured in the fourth game and missed the rest of the season.

“Seeing him go down against Brebeuf Jesuit was the toughest thing that happened all season,” Fremion said. “What he and I did in those first three games was incredible. I’m never going to forget those. Even on my highlight film, half the plays are with him, which I think is hilarious because it’s just three games.”

Fremion said he had confidence in sophomore Malcolm Houze, who became the starter. After a tough two games, Houze was able to turn things around in the 31-30 loss to Chatard in the regular season.

“This year was remarkable,” Fremion said. “From the seniors to the young guys, this was by far my favorite season of all time.”

Fremion said he made the most improvement in speed and strength.

“I got a lot bigger in the offseason and definitely faster than I was the year before,” he said.

Fremion gave up basketball after his sophomore season to concentrate on football and baseball.

“I’ve always taken baseball the most seriously because we come from a baseball family,” Fremion said.

Fremion, a center fielder, hit .330 and 19 runs batted in for Guerin last season.

“I hadn’t thought about playing football in college until this year,” he said.

Now, he is thinking about playing football in college or baseball and football at a smaller college.

“I have just about as much love for both sports,” Fremion said.

He recently took a visit to DePauw University for both football and baseball. He plans to major in business management.