You are at:Home»Current in Noblesville»Noblesville Community»Athlete of the week: Noblesville fullback gets boost from added size, strength

At 5-foot-7 and 160 pounds, Noblesville High School junior Logan Shoffner isn’t the size of most fullbacks.

Shoffner has put on 20 to 25 pounds since his sophomore season.

“I feel like in the offseason I got a lot stronger, and this allowed me to power for some extra yards and allowed me to get a little faster,” Shoffner said. “The hits didn’t hurt quite as much, and it helped me get some extra hard-fought yards. I feel I was playing with more confidence.”

This season, Shoffner rushed for 1,414 yards on 189 carries and nine touchdowns for the Millers (4-7). As a sophomore, he ran for 1,270 yards on 148 attempts with four touchdowns. He set the school single-game rushing record with 347 yards against Mt. Vernon in the opening game of his sophomore year. 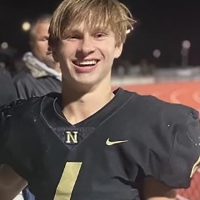 “Logan has a drive to be great, not only in football, but also in the classroom,” Millers football coach Dave Sharpe said. “He is a model citizen, great leader and incredibly hard worker.”

Sharpe said Shoffner has special qualities as a running back.

“He does not lose speed while making subtle cuts,” Sharpe said. “His vision and processing of information is the best I’ve ever seen from the fullback position.

He contortions his body to burst through small running lanes. His balance is unmatched. He just doesn’t go down on the first tackle attempt. He always gets that extra yard or two after contact.”

Sharpe said Shoffner is an even better blocker than he is a runner.

“He is definitely a complete football player and will be our captain and leader as we head into this offseason,” Sharpe said.

Although fullback is his primary position, Shoffner said sometimes when the offense rotates to other formations, he’s a halfback.

“Through elementary school, I was a running back,” Shoffner said. “In middle school, I shifted away from running back and played cornerback on defense. But I’m glad I went back to (running back).”

“I feel like we are working on chemistry,” said Shoffner, who wants to play football in college. “We lose some offensive linemen, but we have a lot of returning starters that will help us take that extra step.”

Shoffner also plays baseball for Noblesville. He was primarily a pinch runner as a sophomore.