The studio focuses on full-body workouts using machines that are a little bigger than the average machine with heavier resistance. It offers small-class settings of six so that each client will be challenged. 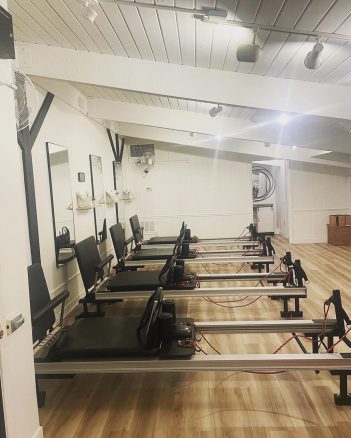 Shelly and Jamie met when they were students at Indiana State University, where Jamie played football. Signed as an undrafted free agent by the Tennessee Titans in 2006, Jamie – a tight end – joined the Colts for two seasons, beginning in 2008, before retiring from professional football after the 2012 season.

A Terre Haute native, Jamie and Shelly made Indiana their home and opened Green Apple Boutique – which sells “athleisure-wear for the on-the-go women” in Carmel in 2012. The couple moved the store to Zionsville in 2018.

For Jamie and Shelly, living a healthy lifestyle has always been important.

“Jamie and I have enjoyed working out together, and he is a massive motivator,” Shelly said. “He’s naturally competitive and having been at the highest level as an athlete, he’s taught me to push myself, to know my goals, and then to make them happen. We teach our two daughters, Gracelyn and Lyla, the importance of this by keeping your heart and body healthy in addition to making good food choices to fuel your body.”

Shelly began her journey with Pilates after becoming certified and teaching for two years at a studio in the Village of WestClay. There, she met instructors and clients and learned more about Pilates.

“I’ve tried so many different workouts, and I loved it all, but as I have gotten older, and both Jamie and I have had some injuries, we have both learned to listen to our bodies,” Shelly said. “When I found Pilates, I was instantly in love.  I just couldn’t believe after a few weeks how much better I felt. My form, joints, muscles, posture, flexibility, and strength are all aligned.”

Pilates is a style of workout people of any age can benefit from because it promotes mobility and strengthens all muscle groups. It helps with balance and elongation and can improve posture and body awareness, according to fitness experts.

Green Apple Boutique was created when Green Apple Core Fitness had its official launch at the end of 2022. The studio had a ribbon-cutting ceremony Jan. 11.