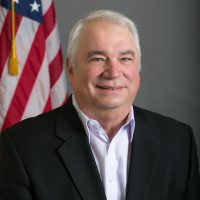 DeReamer has served on the council for eight years. In a release announcing his reelection bid, he said he “looks forward to working with Mayor Scott Fadness and the city council to keep the city thriving and going in the right direction.”

DeReamer’s political experience includes three terms as Hancock County surveyor, one term as the mayor of the City of Greenfield from 2008 to 2011 and two terms on the Fishers City Council.

DeReamer said he “looks forward to representing all of the residents of the Northeast District for the next four years.”