You are at:Home»Current in Fishers»Fishers’ Dresser and Kah to perform in ‘Behold the Lamb’ 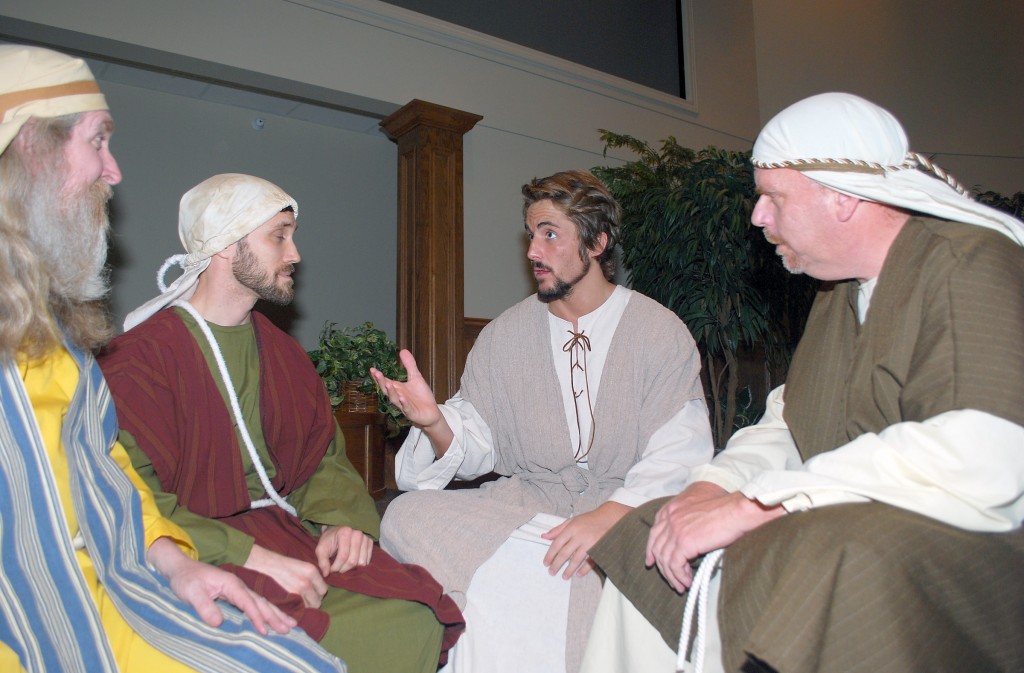 Jesus (Clayton Jennings) sits and talks with his disciples. (Photo by Robert Herrington)

Just in time for Easter, Harbour Shores Church presents its stirring musical drama, “Behold the Lamb,” for the 22nd year. The production will take guests through the Old Testament to Passover week in the New Testament, and ends with a spectacular heaven finale.

One of, if not the largest cast for a Hamilton County production, “Behold the Lamb” involves more than 500 individuals with 300 costumed actors and musicians – including soloists Stephanie Dresser and Audrey Kah of Fishers. Director Lisa Jennings said all involved are members or regularly attend Harbour Shores,8011 E. 216th St.,Cicero– just north of the Noblesville city limits border.

“It brings us together – one heart, one mind, one focus,” said Jennings. “I never cease to be amazed at what God has done and continues to do in this church.”

Approximately 98 percent of the church congregation is involved every year.

“It is an opportunity for entire families to serve together, from birth through grandparents. Several church members take a week of vacation to be available during BTL week,” said Jennings. “No one gets paid, yet thousands of hours are invested sewing costumes, building and painting sets and props, rehearsing, blocking, baking for the reception and, most importantly, praying!”

BTL is a two-hour, original production with scenes from the Old and New Testaments. The first performance, a more traditional Easter cantata, was held in 1991.

“Because of community demand, it was repeated in 1992. At that time, people in the community suggested we move the production to a larger facility to accommodate the crowds,” she explained. “It was never our intention to have a ‘mega-drama ministry,’ but God’s leading was clear.”

In 1993, the church took a step of faith and rented Noblesville High School,18111 Cumberland Rd., where the annual play has been staged the past 20 years. Jennings said people came from all parts of Indiana and many surrounding states. In 1995, the name was changed to “Behold the Lamb.”

“The name comes straight from scripture, John 1:29. We have added performances through the years to accommodate ticket demand, yet we still turn away thousands of ticket requests,” said Jennings. “If we could add more shows, absolutely we’d do it. We could add two full weeks and still not accommodate all of the ticket requests.”

This year,Jennings estimates approximately 20,000 ticket requests have been turned down. When the ticket office opened at 9 a.m. March 5,Jenningssaid the church averaged 2,460 calls per minute the first two hours. In fact, the volume of calls shut down the server, causing phone lines to be down for more than two hours.

“I’m thankful when the phone rings one time,” said Jennings. “People from Kokomo and Fairmount drove here to get tickets when they couldn’t get through on the phone … It’s moving and it’s humbling.”