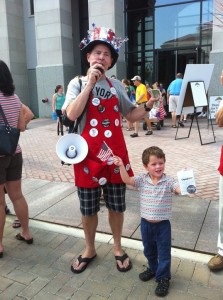 When the post-fireworks traffic has cleared and the last food vendor pulls his deep-fat fried Twinkie trailer out of Civic Square, the 24th edition of CarmelFest will become an official piece of history. The 2012 Carmelfest Committee can take a well-deserved rest after putting their heart and soul into every detail to make sure a super-fantastic, hot time was had by all. But this year’s committee should pause to thank and appreciate the two ladies who founded CarmelFest, Dottie and Nancy.

In 1987, Carmel, Ind., celebrated its Sesquicentennial. Preparation for the event took place over two years, and the primary festivities would occur during the July Fourth holiday. Carmel, for years prior, always had a parade and then fireworks at dusk launched by the local Jaycees. The celebration was a huge success for our small suburb of just over 25,000 people.

In the fall of 1987, Dottie Hancock was elected mayor of Carmel. One of her first priorities after the November election was to figure out how to recreate some of the events from the Sesquicentennial and make them an annual part of Carmel’s summer.  She turned to Chamber of Commerce Executive Director Nancy Blondin.

The story goes that the only fun part for the two ladies was the planning dinner, which included at least a bottle of wine. During that first strategy meal, which should have been an hour but turned into five, a concept emerged for an Independence Day Festival that could not be equaled by even the pros in Washington, D.C. And so, CarmelFest was born.

July 4, 1988 the first Carmelfest was held in the exact same spot as it is held today.  However, after just a year, it moved to where the new Carmel-Clay Library stands now, because the city was building a new City Hall. Two years later, Carmelfest once again upgraded locations, this time to the newly constructed Carmel High School Football Stadium, because traffic and crowds outgrew the library land.

In total, the Carmel Chamber of Commerce started, grew and nurtured Carmelfest for six years until they passed the torch to Mayor Ted Johnson. He and a committee of citizens wanted the festival to return to Civic Square and the new Minnie Doan Gazebo. That occurred in 1994, and that is where Carmelfest has remained for the past 18 years. So, this year as bombs are bursting in air, I think it fitting to appreciate the gift left behind by Dottie and Nancy.