You are at:Home»Current in Fishers»Fishers police responds to gas station robbery 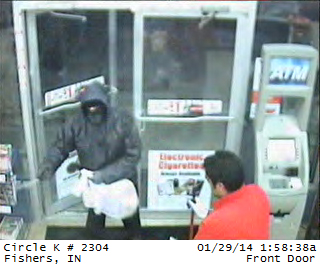 Fishers police responded to a robbery that took place at 2 a.m. on Jan. 29 at the Circle K gas station at 9611 Allisonville Road. According to Fishers police, an employee of the gas station reported the incident, saying that a white male entered the store and demanded cash while holding a large knife. The employee handed over money and was not hurt.

Although Fishers police officers quickly arrived in the area, the suspect fled the scene and was not caught. Investigators and Crime Scene Technicians also responded to the location. Anyone with information about the robbery should call Detective David Finn at 317-595-3300.

Fishers Police released this description of the suspect:

“What we are telling people,” said Sergeant Tom Weger of the Fishers Police Depart., “is that if you see something, say something. We always encourage people to call 911.”