You are at:Home»Current in Carmel»Carmel Community»Asian longhorned beetles making their way to Indiana trees 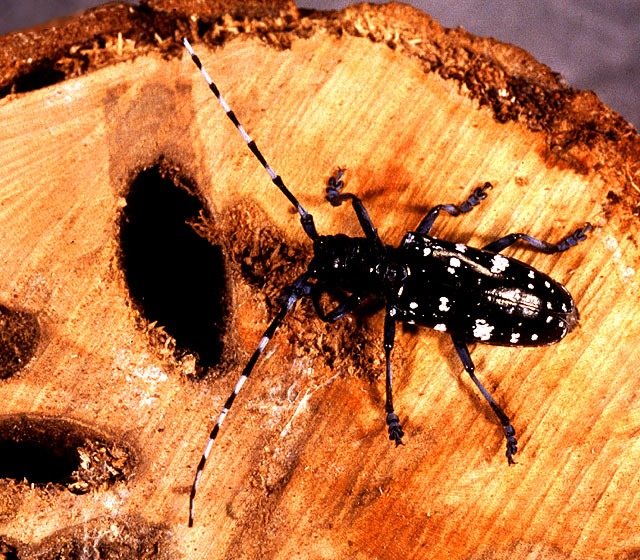 Gardeners and tree-huggers beware: the Asian longhorned beetle is making its way to Indiana trees.

According to local park naturalist and Zion Nature Center manager Mindy Murdock, the Asian longhorn beetle is just one member in the current onslaught of non-native insect species to hit the United States that pose severe impacts to our native forest habitat as well as local industries.

“The Asian longhorn beetle can vary their host plant among several different hardwood species. Maples seem to be hit the hardest, but they have also infested elm, willow and poplar species,” Murdock said. “Although the insect has not been found in the state, it is important to keep informed.”

Murdock noted that the best time to spot the insects is in the summer months, when the adults emerge from the trees to reproduce. The adult beetle is about an inch to inch and a half long and has a shiny black body with white spots. The insect has very long black and white banded antennae.

“In the summer months, where the insect is present, you can find the adults on tree branches, outdoor furniture, walls, sidewalks and even cars,” Murdock said. “The Indiana officials mention that residents should routinely check their trees. Some things to look for that could indicate you have a tree infected with the insect are dime sized exit holes in the trunk of the tree, sap running from those holes, yellowing tree limbs and coarse sawdust around the base of the tree or on lower limbs. Of course if you suspect that you may have a tree infested or have seen what appears to be an adult it’s best to capture the insect or take several pictures and contact the Department of Natural Resources.”

Currently, the Asian longhorn beetle is found in New York, Massachusetts and Southern Ohio. The insect arrived from Asia on hardwood packing material in the 1990s.

Treatment is difficult and according to APHIS involves cutting and removal of infected trees and then treatment of any nearby hardwood species.

“One thing that is stressed, the same as with EAB, is that residents do not move firewood, as this is a simple way to transport both insect species to areas that are currently unaffected,” she said.

The US Department of Agriculture has set up a website that provides information as well as what is being done in areas that are currently fighting ALB infestations. The site is www.asianlonghornedbeetle.com/

“This is officials are taking the insect threat seriously and want Hoosiers to be aware,” Murdock said.