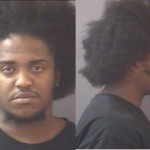 Last night an alert resident helped Fishers police officers catch two car thieves. Shortly after 3:00am, this morning, a resident call 911 to report a suspicious car near her home. The resident was able to provide a vehicle description and direction of travel. She told Dispatchers the dark colored sedan was occupied by two people dressed in black. At one point she also observed the two suspects get out of the car and walk around her home.

Several Fishers police officers responded to the area and were able to locate the suspect vehicle and the two occupants. While speaking with the suspects officers learned the dark colored sedan was reported stolen from Indianapolis. Both suspects were taken into custody without incident. The driver, later identified as Juan Price, was transported to the Hamilton County Jail. The passenger, identified as a 17 year old juvenile, was transported to the Hamilton County Juvenile Detention Center.

This case serves as a great example of the See Something, Say Something Campaign that we have adopted here in Fishers. Residents are encouraged to call 911 anytime they see something suspicious. Chief of Police George Kehl says, “If something appears unusual to you then the police department considers that activity suspicious and we want you to contact us immediately.” “This incident proves that a strong partnership between the community and the police department is vital in deterring and detecting criminal activity”, continued Chief Kehl.

Residents can contact Sergeant Tom Weger to learn more about the Fishers Neighborhood Crime Watch Program or other community out-reach programs offered by the police department.