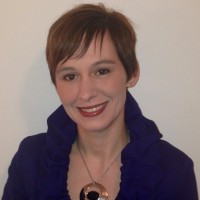 “One cannot observe her lessons without learning something new about how to be a better teacher,” Higdon said. “I frequently encourage both music and non-music teachers to watch her class, and when they do, they all come away stating the same thing — ‘She is a rock star!’”

“I was very honored to be nominated in the first place, because I know how much work it takes to nominate someone,” Johnson said. “To actually win the award was super exciting, especially with the musical going up in the same week.”

Creekside students performed “Aladdin Jr.” last month and Johnson served as one of the co-directors.

“I knew I had been nominated, but you never know how big the nomination pool is and who else has been nominated,” Johnson said. “It was a very nice surprise.”

Johnson, 35, said it’s been an honor to watch the Creekside choir program grow. In her sixth year at Creekside, it has grown to more than 280 students from 120 when she started.

In sharing her part of her nomination materials, Higdon said. Johnson is energetic and encouraging.

“She runs a fast-paced, content-rich classroom that keeps students fully engaged,” Higdon said. “She is a master at pulling in kids who may lose focus without missing a beat. Her lessons stress music literacy, sight singing, rhythm reading, dictation and proper vocal technique in addition to tackling challenging literature. Even so, students in her classroom learn about life and how to be capable, confident, caring young men and women, because this is a deliberate component of her instruction.”

Above all else, Higdon said, Johnson’s students adore her. Higdon included students’ comments in her nomination process.