You are at:Home»Current in Carmel»Carmel Community»Muskrats at home in Carmel’s Central Park 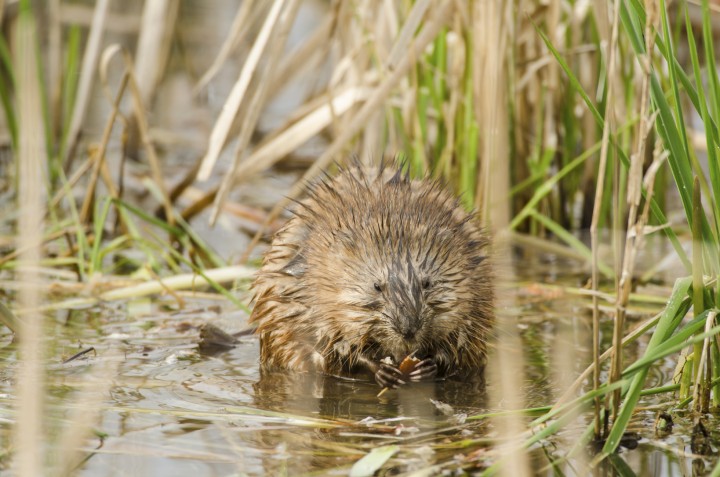 Muskrats, like the one shown here, live in dirt mounds in Carmel’s Central Park. (submitted photo)

Carmel’s Central Park may best be known as the home of the Monon Community Center, but its natural wetlands have also come to be known as home to pack of muskrats.

The rodents weigh in at about three pounds and have long, dark reddish-brown fur. They look a bit like beavers but are related to the vole.

The muskrats live in dirt mounds built with cattails and aquatic plants, which also serve as the main source of food in their diets.

Carmel has the first city park system in Indiana to be Wildlife Friendly Certified. This means that the department is committed to not making changes in the area to disturb the wildlife living there.

“They are safe in their natural habitat,” Labas said.

Some residents have expressed concern that the muskrats will move into nearby subdivisions with pond access. This is not likely to happen, Labas said, because of the sterile waters and lack of food sources.

Parks officials hope the community will be educated on the muskrats and learn how they rely on native plants and species in the park’s system to survive.

“It’s a full circle survival in the wetlands,” Labas said.

Signs with information on the muskrats is planned to be posted in early summer.

“We are working on interpretive signage that will be placed in Central Park near the mounds,” Labas said.