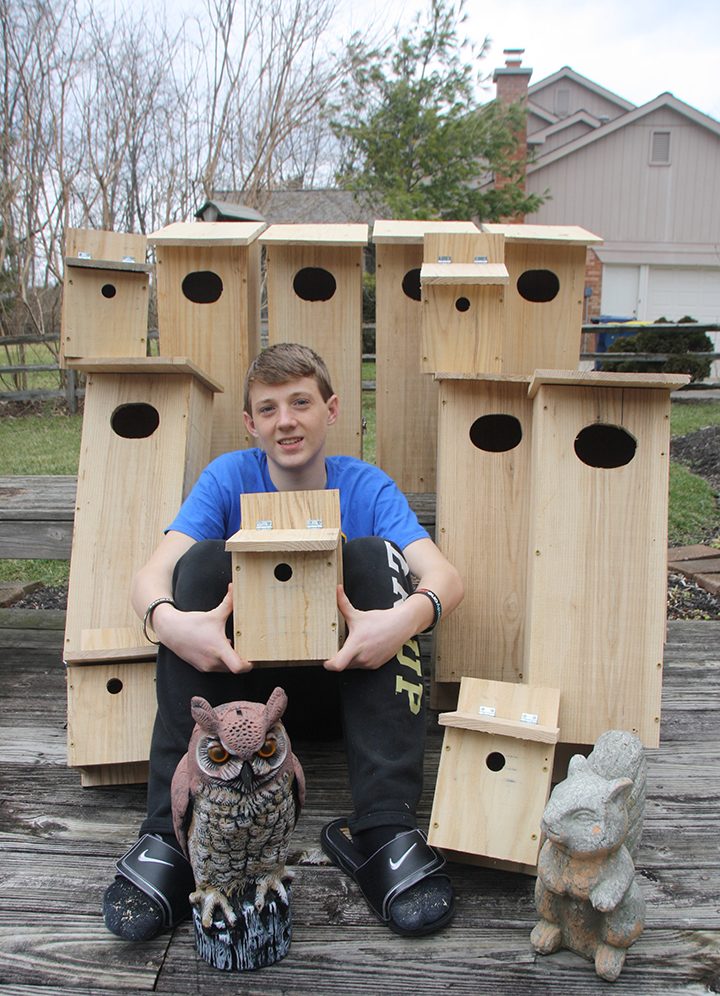 Corey Varnau made boxes for ducks and prothonotary warblers for his Eagle Scout project. (Submitted photo)

When Carmel High School freshman Corey Varnau was looking for an Eagle Scout project, he turned to another Eagle Scout for advice.

Varnau said Jud Scott, an Eagle Scout and owner of the Vine & Branch, a tree care business in Carmel, was talking with Varnau’s grandfather about benches made with recycled ash wood. When Varnau contacted Scott about that possibility, Scott said it would be a better idea to build wood duck boxes.

“That’s where it got rolling,” said Varnau, who received his Eagle Scout award for his project April 21.

Scott said Vine & Branch would donate lumber for the boxes if he would use ash wood. Ash trees die from the emerald ash borer, a beetle that feeds off the ash tree. The beetles do are not attracted to the boxes, Scott said.

The boxes provide a nesting area for the mother ducks.

“I made five wood, duck boxes and five prothonotary, warbler boxes,” Varnau said. “In the actual production of the boxes, I had five other scouts help me out and a couple of adults, including my dad. When I installed the boxes, we had five scouts and three adults.”

With help from fellow Troop 202 Boy Scouts and family members, Varnau installed the duck boxes and warbler boxes at Oliver’s Woods Nature Preserve in Indianapolis and at nearby White Owl Pond. Both properties are owned by the Central Indiana Land Trust.

“The poles are about six feet above the ground, and we install it close to the water so the ducks can swim up to it, and when they’re ready to get out, they can hop back in the water,” Varnau said. “I’ve always enjoyed the outdoors, but I’ve never had that much knowledge on the wildlife. This project got me more interested in it.”

In appreciation for his help, Varnau made five more duck boxes to give to Scott.

“All of the wood for the boxes was made out of recycled ash and is from trees that were growing 20 miles or less from where they are today, which makes this a very sustainable project,” Scott said.