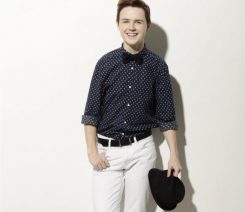 Mitchell Siefker, who has been acting with Christian Youth Theater since 2009. (Submitted photo)

Mitchell Siefker was Charlie Brown in Christian Youth Theater’s inaugural performance, “You’re a Good Man, Charlie Brown,” in 2009. Now he will act as Bert in “Mary Poppins” for his last performance with CYT before leaving for college.

“I think (‘Mary Poppins’) is a lot more audience friendly just because it’s live action and there’s so much happening all around the audience,” he said. “The cast is in the audience and flying all around. It’ll be a lot of fun.”

Mitchell took a break from CYT to concentrate on his senior year at Carmel High School, so the 18-year-old said he doesn’t feel too nostalgic about performing his last show.

“It’s been really fun to reconnect with old friends I didn’t go to school with and just knew through CYT,” he said.

“One of the really unique things about CYT is it is kids from so many different schools and when they get together each weekend to rehearse, they haven’t spent the week together,” added Lindy, Mitchell’s mother.

Mitchell said although he doesn’t want to pursue acting in college, he wants to be a teacher and being a part of CYT led him to that decision.

“I’m planning on studying elementary education so that I can still teach younger kids,” he said. “I assistant-taught a couple classes at CYT and did a couple of summer camps, so that really opened my eyes. It’s really good to still see high school and middle school students working together outside of school to put on a great show.”

Tickets: $12 for students, $14 for adults. Purchase at the door or at cytindy.org.