You are at:Home»Current in Geist»‘Kause’ and Effect: Fortville residents leading fundraising charge for rare disease 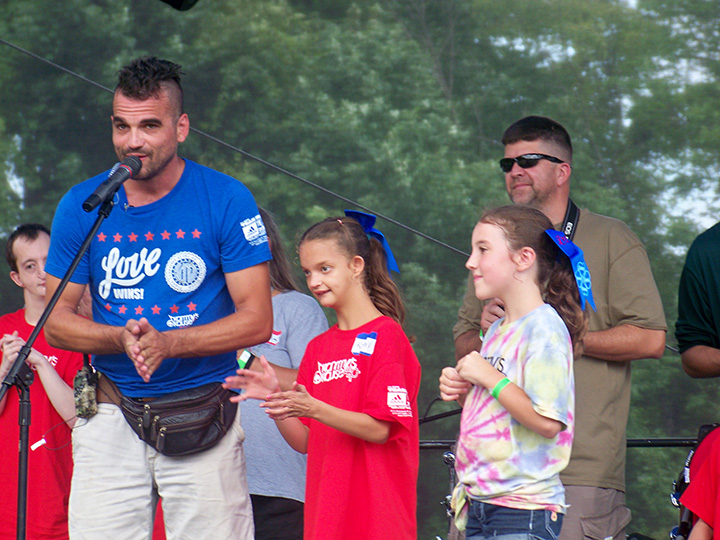 Fortville resident Jared Hiner introduces his daughters, Kamdyn and Sophia, to the crowd at Kammy’s Kause, a two-day music festival and fundraiser for the 4p- Support Group. Kamdyn, 14, was diagnosed with 4p-, a rare chromosome disorder, when she was one-moth old. (Photo by Sam Elliott)

Receiving a piece of paper 14 years ago started Fortville resident Jared Hiner down a path to organizing what’s become the world’s largest fundraising effort for the rare disease known as 4p-, or Wolf-Hirschhorn Syndrome.

The disease is a rare chromosome disorder that causes a range of physical and mental handicaps, as well as organ failure and developmental delays. The international 4p- Support Group knows of more than 600 cases of 4p-, 13 in Indiana, including Hiner’s 14-year-old daughter, Kamdyn, of Fortville. 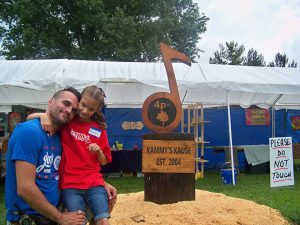 Jared and Kamdyn Hiner at this year’s Kammy’s Kause event, a major fundraiser for the 4p- Support Group. (Photos by Sam Elliott)

“Kamdyn was diagnosed when she was about one month old and they literally gave us a piece of paper with a few paragraphs on it and they were like, ‘This is what we know,’ Jared Hiner said. “They told us that if Kam lived past the age of two, she was more than likely going to be a vegetable with no personality, or wouldn’t be able to walk or talk or anything. It was pretty heavy news to get, but I looked at that piece of paper they gave me and they told us all this based off these few paragraphs. I thought, ‘There’s got to be more. That can’t be it.’”

Jared found and joined the 4p- Support Group and quickly recognized a need for increased funding to help affected families and promote research and awareness of the disease.

“After looking at that piece of paper, I said, ‘Something’s got to be done about this.’ Nobody should get that piece of paper we got,” Hiner said. “So, through the 4p- Support Group, we dedicated ourselves to being a fundraiser for them. With the money we’re able to raise and donate directly to them, they can channel it into research and they can help other families”

With the help of family and friends, Hiner organized the first Kammy’s Kause music festival and fundraiser for the 4p- Support Group in 2004. That first afternoon event featured performances by five local bands with approximately 50 attendees and Hiner’s parents selling candy bars and sodas. Approximately $1,000 was raised.

“The first year that we were here we used the risers from Mt. Vernon High School from their choir department, like I went and picked them up in a van and brought them here,” Hiner said. “They sat six inches off the ground, and that was our stage. It progressively kept getting bigger to what you’re seeing today, with a legitimate 52-foot-wide, 30-foot-deep stage.”

This year’s 13th annual Kammys’ Kause music festival featured 25 bands over two days Aug. 19 and 20 at Fortville’s American Legion Park. As the event has grown over the years, thousands have attended and helped raise more than $300,000 for the 4p- Support Group. Families affected by 4p- travel from as far as Michigan, North Carolina, Iowa, New York and Wisconsin to take part.

“There is no other community in the U.S. like this community,” said Amanda Lortz, the Columbus, Ohio-based Executive Director of the 4p- Support Group whose 12-year-old daughter, Lauren, has 4p-. “The support we get here is really how we are able to afford our national conferences, how I can travel to genetic conferences and speak with geneticists and genetic councilors. Really, it all started through this fundraising. There’s the social media part of it, too, with just raising awareness. I think our families are motivated and inspired by Jared’s drive. Seeing the way this community responds to him and to this cause, it’s amazing. There’s nothing like it.” 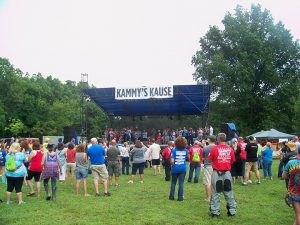 Musician Kara Cole performs a song during a tribute to families affected by 4p- at Kammy’s Kause.
 

While Jared Hiner and his team of approximately 70 volunteers are dedicated to continuing the Kammy’s Kause music festival every year,  and he has big dreams for its future with national acts, a custom amphitheater and venue with a special needs waterpark and crowds of 20,000-plus, his next project looks to partner local businesses with special needs families for safe spaces for public outings.

“It’s called Kammy Kares. Our big picture right now is to get local places like gymnastics gyms of Monkey Joe’s or places like that that kids like to go to and have fun and have them dedicate one day a month to open it up for special needs families exclusively,” Hiner said. “Maybe one day out of the month these kids can go out for a fun day in public and not get stared at, not get questions, not get laughs or people making jokes, just a safe place for them to go and enjoy stuff all the other kids get to enjoy.

“That’s the movement we’re on right now, and the good thing about that is, it’s not just Indiana. We can hit that across the entire United States,” he added. “By this time next year we plan to be branched out into at least 15 states with Kammy Kares and have these things set up for these families. They can use us as a hub of information through the website, find out what’s close to them that’s doing it and go and have a great tim,e and we can help people out we might never get to meet. That’s a cool thing.”

For more, or to donate or get involved, visit KammysKause.org or 4p-SupportGroup.org.