You are at:Home»Current in Westfield»Westfield resident Neely recognized by Government Technology Magazine

Westfield resident and CIO for the state of Indiana Dewand Neely was recently named one of Government Technology Magazine’s Top 25 Doers, Dreamers and Driver’s for 2017. Indiana is one of the few states that benefits from having centralized information technology. 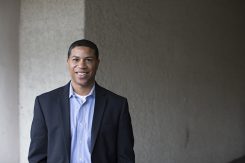 “All of your constituent-facing agencies like The Bureau of Motor Vehicles, Workforce Development, Child Services, etc., all of their IT is handled in one location. That was something Mitch Daniels did when he was first elected governor. Not all states benefit from that. Typically, the agencies do their own IT, but we’re lucky to have that centralized. I run that centralized agency,” Neely said.

Neely spends most of his days meeting with more than 100 different agency heads,  brainstorming how his department can assist those agencies in making business changes. Neely has been in his position for 18 months.

“My predecessor, Paul Baltzell, was kind of the pilot to really get the data analytics section going along with Gov. Pence,” he said. “It’s something other states are trying to do. Paul and I were very much in tandem on that. I think Government Technology Magazine was really excited to see that I was able to continue what he put in place and expand it and work it into the kind of everyday operations, everyday business for the state.”

He said the award represents not only his own hard work but the work of others.

“Even if this was just an Indiana award and didn’t have my name on it, I would totally embrace that and take it on. I’ve been telling folks that a machine as big as state government doesn’t move with any one person,” Neely said. “By no means did any of this happen just from me being there. It takes a lot of moving parts, a lot of agencies getting on board, a lot of working together and some really good people. That’s exactly what we have here in the state of Indiana. I’m happy to accept it to recognize our state and how well our state works together.”