You are at:Home»Current in Carmel»Carmel Community»Clay Middle School’s Stewart named Carmel Teacher of the Year

For almost 12 years Todd Stewart has taught social studies at Clay Middle School, doing the job he loves. On April 27 he was rewarded for his hard work and passion for teaching by being named the 2017 Stephen A. Backer Teacher of the Year for Carmel Clay Schools. 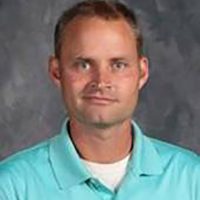 “Winning the Stephen A. Backer Teacher of the Year award is a privilege and an honor, but at the same time humbling. It has been a true joy to work alongside the staff and administration of Carmel Clay Schools,” Stewart said. “I am surrounded by creative and energetic people who are always looking to put student interests first and develop life-long learners and well-rounded students.”

Stewart got his start in teaching in Seoul, South Korea. But being a teacher wasn’t his original career path – he graduated from Taylor University with a double major in International Studies and World History.

“I went to Korea with ambitions to travel the world and experience a new culture, however much more happened. I found my calling to make teaching my profession,” he said. “As you can imagine teaching in an environment where we don’t share the same native language can be challenging. I definitely had to be creative and flexible in my approach. I believe these same traits have followed into my classroom today. It is my desire for history and culture to come to life for my students, which requires creativity and flexibility.”

Stewart hopes students leave his classroom with a “love of history, an understanding of culture and a desire to see more of the world.”

“Our world is becoming more interconnected, and I want my students to be better prepared to interact in a cross-cultural environment,” he said. “I also want to make learning fun for my students and hopefully when they think back on their time in my classroom they will remember a few of the stories, some of the lessons but most importantly that they are valued and have the potential to do great things.”

In addition to his work in the classroom, Stewart also serves as the Clay Middle School football coach and assistant track coach. He also is a new teacher mentor and a participant in the CCS Cadet Teaching Program, helping guide Carmel High School students as they consider teaching as a profession.

“As a teacher who did not have the typical path into the profession, I valued the mentor program when I was just beginning,” Stewart said. “The mentoring program provides new teachers a safe place to bounce off ideas and ask for guidance in a job that you start out running right out of the gates.”

Stephen A. Backer Teacher of the Year nominations are made by students, parents and colleagues each spring. A selection committee of teachers and administrators reviews nominations, conducts interviews with the candidate’s principal and nominator and then selects a recipient in April.

The CCS Teacher of the Year is endowed through the Carmel Education Foundation. The award was created in memory of Backer, who served on the CCS Board of Trustees from 1994 to 1998 and from 2006 until his passing in March 2009.

Stewart will represent CCS at the Indiana Teacher of the Year competition this fall.