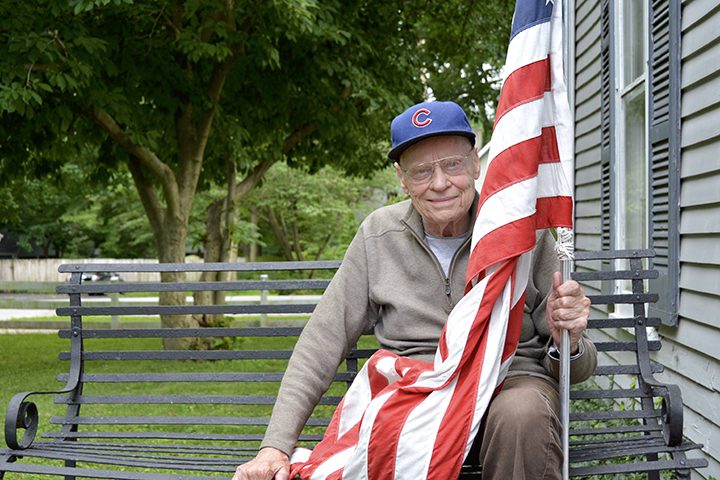 Gerald Ellis sits on the porch of his Zionsville home. He witnessed the atomic bombing of Hiroshima Aug. 6, 1945. (Photo by Lisa Price)

Ellis had just left basic training in the U.S. Army and was on a ship headed to Japan. He was sitting at the bow roughly eight miles off the coast of Hiroshima watching for naval mines when he saw planes fly overhead, then a mushroom cloud. 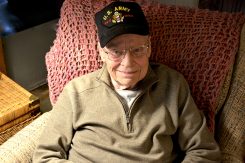 Born in Tipton in 1925, Ellis’ father worked for the Nickel Plate Railroad until purchasing an 80-acre farm north of Westfield where Ellis spent his teen years.

He graduated from Sheridan High School in 1943, which would have made him eligible for the draft didromg World War II, but because his family farmed with horses, his father requested a year’s deferral for Ellis.

“I didn’t know my dad was going to get me deferred a year, and I was really a little unhappy about it,” he said. “I was ready to go. In retrospect it probably saved my life, because otherwise I think I would have been at the Battle of the Bulge (in Europe). This way I went to Japan.”

In 1944, he was drafted and went to Indiana’s Camp Atterbury, then Georgia, California and Seattle before boarding the ship that would take him across the Pacific. 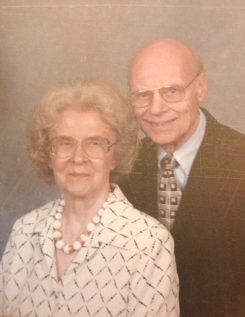 Gerald Ellis and his wife, Marjorie, were married for 54 years before she died in 2006. (Submitted photo)

On Aug. 6, 1945, Ellis and his fellow soldiers were ready to invade Hiroshima. Landing barges were connected to the side of the ship. Ellis was wearing landing gear, watching for naval mines when he saw the planes.

“I thought they’d hit an ammunitions plant,” he said. “I’d never heard of an atomic bomb.”

At about the same time, he spotted a mine. He sounded an alarm, and the mine was safely disarmed.

But from his vantage point, Ellis was unwittingly exposed to radiation fallout from the blast. A breeze spread it across the bow of the ship.

“That’s why my late wife and I didn’t have children,” he said. “But I guess if it hadn’t happened, I might not be here.”

A little more than a week after the atomic bombings of Hiroshima and Nagasaki,  Emperor Hirohito announced Japan’s surrender, and Ellis’ ship docked in Hiroshima harbor.

“It was complete devastation,” he said. “There wasn’t any town left.”

Ellis didn’t recall seeing any signs of life on shore but remembers spending several weeks in Hiroshima before heading to Nagasaki, Osaka and then Tokyo.

Ellis then spent a year and a half as a military policeman in downtown Tokyo during the U.S. military occupation. He was stationed in Nagano as a member of the 720 MP Battalion, for which he needed to be at least 6 feet tall.

“I guess they thought maybe being tall, that would intimidate (Japanese citizens),” he said, adding it wound up being unnecessary.

“The Japanese were very friendly,” he said. “We had white Jeeps, white helmets, white belts, white leggings, so they knew we were MPs.”

Ellis taught many of the “kids” in his troop, most of whom were from West Virginia, to drive, with the added challenge of driving on the one left side of the road, as is the case in Japan. 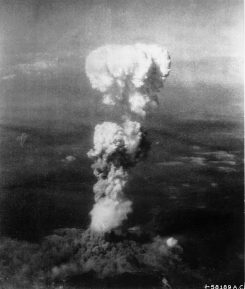 At the time this photo was made, smoke billowed 20,000 feet above Hiroshima while smoke from the burst of the first atomic bomb had spread over 10,000 feet on the target at the base of the rising column (Photo by Enola Gay Tail Gunner S/ Sgt. George R. [Bob] Caron)

“They were anxious to learn,” he said. “I can honestly say I have never had a traffic accident, even after 75 years of driving a car. It was an experience for a kid who’d just turned 19.”

Ellis often watches local high schoolers head home and muses that he was that same age while serving in the military.

When he returned to Indiana, he found a job in insurance, an industry where he stayed for 45 years and met his wife, Marjorie, on a blind date set up by friends and coworkers.

He and his wife bought their Zionsville home in 1962. They were married for 54 years before she died  in 2006.

“To me getting old, there’s a lot to it. But I think if you have a sense of humor, it really helps,” Ellis said. “I try to find something humorous in about everything.”

On Aug. 6, 1945, at 8:15 a.m., the world’s first atomic bomb was dropped above the Japanese city of Hiroshima. It exploded 2,000 feet above the city, destroying nearly 5 square miles and instantly killing an estimated 80,000 people. More would later die from the effects of radiation exposure. 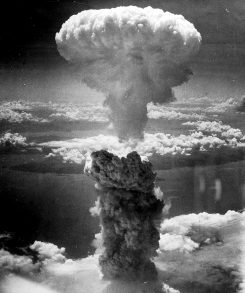 The mushroom cloud above Nagasaki after atomic bombing on August 9, 1945. Taken from the north west. (Photo by Charles Levy from one of the B-29 Superfortresses used in the attack.)

Before the bomb was dropped, there were 90,000 buildings in Hiroshima; only 28,000 remained after the bombing.

Three days later a second bomb was dropped on the Japanese city of Nagasaki, killing 40,000 people. Because the city is located in a valley, the death toll wasn’t as high as Hiroshima, which is surrounded by flat land.

The death toll from the bombs varies by sources, with combined estimates as high as 226,000. On the 50th anniversary of the blast, 192,020 people were commemorated as dying in Hiroshima.