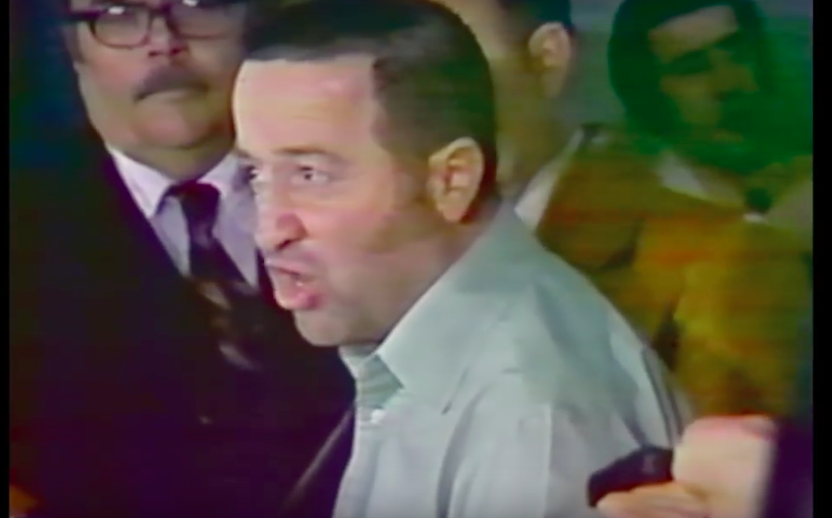 For about 63 hours in 1977, two men in Indianapolis walked the tightrope between life and death.

Tony Kiritsis, a man who fell behind on his real estate payments, took mortgage broker Richard Hall hostage with a shotgun to his dead. It was rigged with a wire that would make the gun go off if anyone tried to shoot Kiritsis or grab Hall. The three-day ordeal was broadcast nonstop on live TV — one of the first long-form uses of the live format locally. The entire city and a national audience were kept in suspense the entire time.

Now, the captivating true story is a feature-length documentary called “Dead Man’s Line,” produced by Indianapolis residents Alan Berry and Mark Enochs. Berry works a day job in Carmel as a marketing director for a private financial firm. The movie was released Feb. 8 and is available for rent through iTunes and Amazon for 99 cents. No theatrical screenings are planned.

Previously, Berry owned several successful music stores in Indianapolis in the 1990s,  but in 2011 Alan was shot during an armed robbery that led to an early retirement from music retailing. He decided to pursue a life in video production, and he’s won an Emmy and produced, directed and edited hundreds of videos, including six documentaries.

Berry previously teamed with Enochs on a documentary about a day in the life of former Indianapolis Mayor Greg Ballard. Enochs suggested the Kiritsis case for their next movie.

“Make sure the topic of the next project has a lot of legs,” he said. “So, I thought true crime and Indiana and immediately the image of Tony Kiritsis came to mind. As a child, I was shocked to see this, thinking, ‘What is this?’”

Kiritsis himself became a sympathetic figure to some because he said he was mistreated by the mortgage company. Others who had fallen behind in their payments began to cheer Kiritsis on, although many saw him as a crazed gunman who needed to be stopped.

“Some think he’s a hero, and some think he’s a crazed thug,” Berry said. “I don’t think either of us had a feeling one way or another, and we wanted to show both sides.”

The documentary doesn’t rely on voiceover narration or reenactments. Instead, it’s told through video and audio archives from Indianapolis TV stations and local radio station WIBC, where Kiritsis would often call in to talk to newscaster Fred Heckman.

“If you can just let the story unfold and speak for itself, that’s something I prefer,” Berry said.

Berry said it took five years to make the movie because there was so much information. He said they watched hours of tapes and compiled mountains of research before starting to interview sources. When they interviewed witnesses, it led to even more questions, Berry said.

“A big part of the process is just finding out where the truth lies,” he said.

Viewers of the documentary can also visit the website deadmansline.com to watch bonus features, including videos that weren’t included in the documentary.

“We think our YouTube page is the definite way to learn everything about this case,” Enochs said.