You are at:Home»Current in Carmel»Carmel Community»Former FBI special agent honored by Sertoma Club 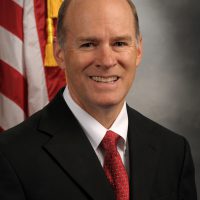 Abbott received $2,000 along with the award. He donated the money to Chaucie’s Place, an advocacy organization focused on preventing child sexual abuse and youth suicide.

The Carmel resident began his law enforcement career in 1987 after FBI representatives came to recruit new members from the University of Puget Sound in Washington while he was pursuing a law degree. He embraced the opportunity to join.

Abbott was assigned to the Washington, D.C., office as a case agent for 10 years. After seeing agents injured or killed, he decided to pursue leadership positions to better protect his fellow agents. This led Abbott and his wife, Jackie, to Paris, France; El Paso, Texas; Clarksburg, West Virginia; and Seattle, Washington. In 2014, he became the special agent in charge of the Indianapolis division.

Abbott retired from the FBI Jan. 31 with more than 30 years of service.

“I’m very proud of the fact that during all my years of leadership, the special agents under my charge, no one ever got hurt,” he said. “That is really, really important to me.”

Sertoma is a service organization that raises money for Indianapolis charities through events such as casino parties and monthly bingo nights while also sponsoring hearing presentations at schools, the National Heritage Essay Contest and guest speakers. The primary recipients of the club’s donations are Noble of Indiana and the Cleft and Craniofacial Anomalies Program at IU Riley Hospital for Children.

With 136 members, the Broad Ripple chapter is the largest all-male service club in Indiana and the largest chapter within Sertoma International. Although Abbott is not a member, he has discussed his work as a guest speaker multiple times since 2014 t.

“I wanted to be able to encourage (Sertoma members) because they really are a force to be reckoned with when it comes to philanthropic service and doing good for the community,” said Abbott, a member of the Carmel Rotary Club.