You are at:Home»Current in Carmel»Carmel Community»Carmel High School grad to join Indiana Coaches of Girls Sports Association Hall of Fame 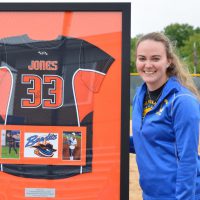 Kelsi Rynard was honored with her professional softball career jersey at a CHS game. (Submitted photo)

However, she wasn’t even thinking about going into the Indiana Coaches of Girls Sports Association Softball Hall of Fame at age 25.

“It was a surprise,” said Rynard, whose maiden name is Jones. “I didn’t know how long after I was done or if it was even a possibility. I received an email that my former high school coach had nominated me. I really didn’t figure I’d get in because I figured there were other people more deserving. I found out they were going to induct me and it’s been cool, for sure.”

CHS softball coach Emily Good is thrilled her nomination led to Rynard’s induction. The three-time all-state member will be inducted June 22 at a banquet at Edgewood High School in Ellettsville.

“Very few have the opportunities, let alone the accomplishments that Kelsi has had throughout her softball career,” Good said. “She has been successful at every level and continues to give back to the game she loves.” 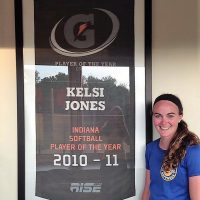 Rynard was named the Gatorade Indiana High School Softball Player of the Year as a senior in 2011. Rynard, a center fielder, batted .464 in leading the Greyhounds to a Class 4A state title that season. She led the state in runs batted in with 52 in 2009.

Rynard played two seasons at Missouri (2012-13) before deciding to transfer to Louisville for her final two seasons (2014-15).

“I made the regional all four years in college and went to super regional my two years at Missouri,” she said. “So I was one game from World Series my freshman and sophomore year. To go to the postseason all four years was special.”

She chose personal and playing time reasons for her transfer.

“I wasn’t happy with my situation at Missouri and also decided to be closer to home because I wanted my family to come and watch me play my last couple of years,” she said.

Rynard, who led Louisville with a .364 average in 2015, was named to the all-Atlantic Coast Conference first team in 2015. Rynard, who played one season of professional softball in 2015 with the Chicago Bandits, lives in Indianapolis where her husband, Chris, is an Indianapolis Metropolitan Police Dept. officer. Rynard works in sports injury research for the NCAA.