Eckard, a Clay Township Board member, was one of the four founders of the South Bend Symphonic Choir. Eckard, who has lived in Carmel since 1994, was honored at the 50th anniversary banquet. 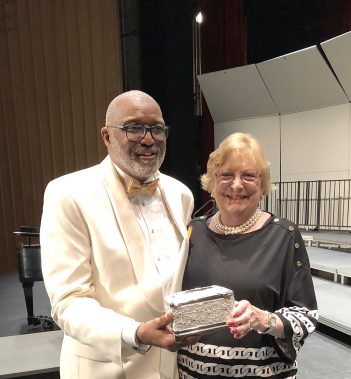 “It was very exciting,” Eckard said. “I got there and there were people I hadn’t seen since the choir started. There were six of the members that were still in the choir and they’ve been there from the beginning.”

Eckard ran through the history of the choir in a 25-minute speech June 9 at a banquet in South Bend.

“I told them things they never knew,” said Eckard, who also sang in the choir for several years. “I started out telling them never in public would I admit my age, but I told them I started the choir at 25 and this is 50 years later, so they could do the math.”

Eckard was presented with a music box on stage in the middle of the Symphonic Choir’s June 10 performance.

“I will treasure that memory and the fact that there is still a group in South Bend that is still singing and better than ever,” Eckard said.

“When we got together, it was clear that I was the newcomer to town and I wasn’t working at the time, and I had time to do what had to be done,” said Eckard, who was previously a member of the Grand Rapids (Mich.) Symphonic Choir.

“Mary not only helped organize it, but she kept it going,” said Pat Miller, who is in her 47th year with the South Bend Symphonic Choir. “She was the president of the board of directors for at least 10 years. She was quite the backbone to the choir, keeping it a vital choir.”

When the choir became separate from the orchestra after 10 years, Eckard said she negotiated with Bob Demaree, dean of the Indiana University-South Bend music department, to have the choir given an artist-in-residence status, whereby the students could have the benefit of singing with the Symphonic Choir as part of their college credit.