This weekend, dragon boat racers from the region will descend on Indianapolis for a festival that highlights the sport and conservation of the White River.

Geist’s Indy SurviveOars – a nonprofit, all-volunteer group of breast cancer survivors who race dragon boats competitively and whose home water is Geist Reservoir – are partnering with the White River Alliance as the highlighted day in its month-long White River Festival. This is the eighth year the White River Alliance has held the September festival. The Dragon Boat Festival is Sept. 29, with registration beginning at 8 a.m. and races beginning at 8:30 a.m.

“We’ve done a fundraiser every year as a capstone to the festival, and we always try to do something unique and fun, not just your normal sit-down dinner,” said Scott Minor, program manager for the White River Alliance. “Last year, we painted canoes. We’ve done trash-to-treasure events a few times, where we take some of the trash and more interesting stuff that is found in the river cleanups and turn those into art pieces. This year, we went in a different direction, and we learned about dragon boat races. We thought it was perfect right now in Indianapolis because of all the attention that is being focused on the river (with the White River Vision Plan).

“We want to show how the river can be a tremendous asset to the city in a number of ways, including recreation, which is a huge quality-of-life piece, so we decided this was a great way to do our fundraiser and to build it over several years. We’re always reinventing the fundraising wheel.”

The race and festival will be inside White River State Park. Teams will have tents on the east side of the bank, and a spectator area and other features of the event will be on the west bank.

Racing will be where New York Street spans the river. Spectators will not be able to watch races from the bridge. The 46-foot boats will load underneath the bridge, paddle down to the start line, about 250 meters downstream, and race upstream back toward the bridge.

“We look to race several times a year. Since we’re the dragon boat racing team in town, it seemed like a logical partnership,” said Elane Shea, president of Indy SurviveOars. “Their interest is to bring attention to the waterways. With us being a breast cancer survivor team, we care that the waters we use are safe. We certainly don’t want to be exposed to anything because we’ve already been on a journey that was not too fun. We’re also mothers, grandmothers, aunts, etc., so we care also about our families and want them to have the best interaction (with the water) as well, so we come to the table with expertise in dragon boat racing and being at races both in the community and competitively. It has been a great collaboration.”

“I started at the beginning of the second year,” Shea said. “A friend of mine was about a year ahead of me in treatment and diagnosis, and she had found out about the team. She told me to come up and try it. I did, during radiation therapy, and once I started, I just didn’t stop. It’s great because women don’t have as many opportunities to be on a team. So, being on a team brings a whole lot of camaraderie.

“There also is the incentive to keep moving and be better, not just for yourself but also for your teammates. The other piece is just the fun and excitement of being part of a sport. Especially for older women, that is rare to find.”

More than a dozen teams will make up the community division of racers and the breast cancer survivors division. Indy SurviveOars sister teams from Louisville, Lexington,Ky. and Illinois also are taking part in the festival.

Minor said the event also will feature a DJ, food trucks and a White River Alliance informational table so people can lean more about the organization’s work.

“Though it also serves as fundraising for us, we love to have people experience it to know what it is to be part of a team,” Shea said. “It’s a way of getting out and working in synchronized support and for team-building. We see groups come out and really have a good time enjoying the water team-building. But also, for this event, the White River is such a worthy cause. It’s about the excitement of enjoying the water, finding a new sport and working together with friends or strangers.” 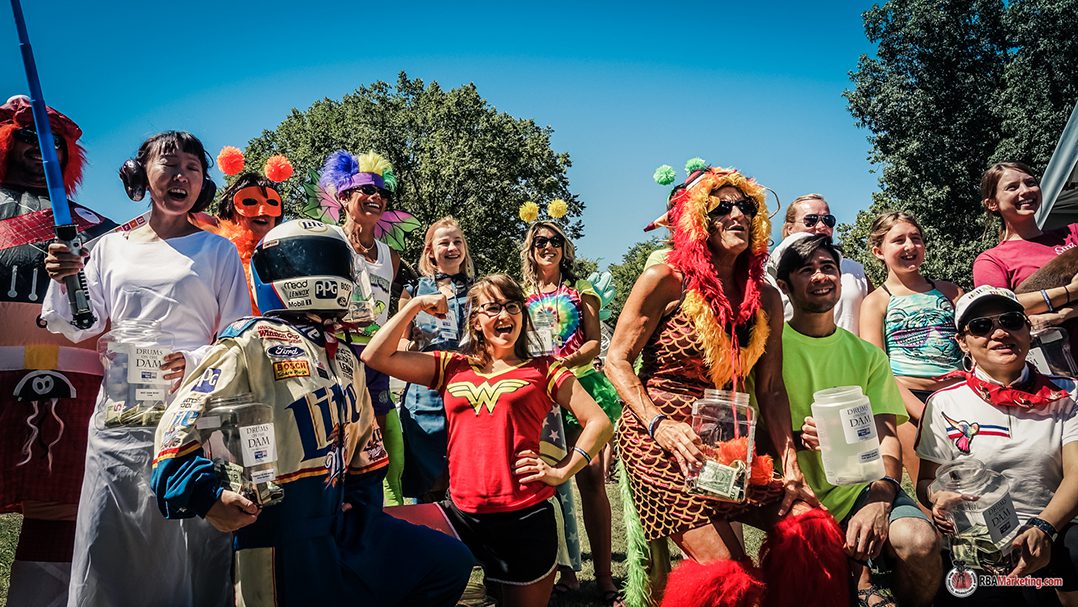 GO TO THE FESTIVAL

“We were founded by Kathy Martin-Harrison with her dedication to helping a friend who was diagnosed with breast cancer,” said Elaine Shea, president of the Indy SurviveOars dragon boat racing team. “What they’re finding is you get through your acute care and treatment, but then you move forward, and past post-treatment, many of us take medication for five years or longer. So, there’s navigating the side effects of survivorship. The research was just beginning (10 years ago) that rapid, upper-body movement was helpful to breast cancer patients with lymphedema. That research has been embellished. Now, several researchers have found a direct correlation with being fit, working hard for endurance, and that there’s a direct correlation between activity and survivorship.

“When we started, we were kind of timid in what we would do – stop, paddle a little biy, stop,” Shea added. “Now, we know to work on endurance. We know to really push ourselves. We practice three times a week. We try to race four times a year.”