Gabi Stigter may only be 15 years old, but she’s already making strides when it comes to giving back. Stigter, a sophomore at Carmel High School, has been named one of the champions for Best Buddies Indiana. 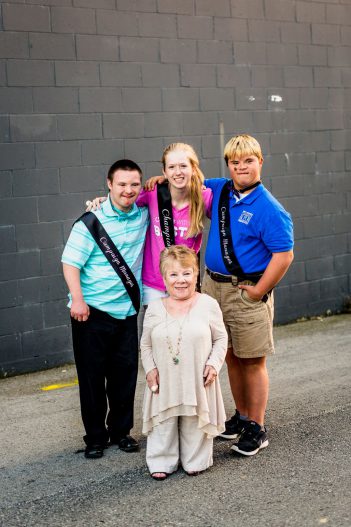 Front, Donna Hammock. Rear, from left, Kevin Miller, Gabi Stigter and Sky Simpson, another boy with Down syndrome who is serving as one of Stigter’s campaign managers. (Submitted photo)

Stigter is competing against 11 other champions to be named the Best Buddies champion of the year, a title reserved for the person who raises the most awareness and funds. According to Stigter, the next youngest champion is a 20-something. The champion will be chosen Nov. 10 at the Best Buddies Indiana gala in Indianapolis.

Although she may be young, Stigter’s passion for giving back to those with special needs spans a decade. When she was 5 years old, she met Kevin Miller, a boy with Down syndrome. Miller is now a junior who attends Damar Services in Indianapolis.

“I have been best friends with him ever since,” she said. “I grew up with him. I was also in a special needs class when I was younger for hearing loss, so I grew up with people with intellectual and mental disabilities and always saw them as having a normal life, but as I grew older, I saw the isolation they had. I did not like that, and I thought they should be included. They are everyday people; they just have different abilities than us and different challenges.”

Stigter joined Best Buddies when she was a sixth-grade student at Clay Middle School. Miller’s grandmother, Donna Hammock, nominated Stigter as a champion for Best Buddies Indiana. Stigter said she is very close with Hammock, who has been diagnosed with dwarfism.

Stigter will host two give back nights, one from 4 to 8 p.m. Oct. 6 at Chipotle,2420 E. 146th St., and one on Oct. 16 at Chick-fil-A, 14647 Thatcher Lane. The restaurants will make a donation to Stigter’s campaign when diners who mention it while placing an order.