You are at:Home»Current in Carmel»Carmel Cover Stories»Go with the flow: Groups partner to improve White River experience in Hamilton, Marion counties

Many central Indiana residents rarely think about it. Others have been told to avoid it. But now, several organizations are working together to make the White River a gem that attracts people to live, work and play near its banks.

Hamilton County Tourism is partnering with the City of Indianapolis and other partners to develop the White River Vision Plan, a comprehensive look at the 58 miles of the river in Hamilton and Marion counties. The initiative was launched in May and has included dozens of meetings with stakeholders and opportunities for the public to provide input.

“We want everybody in central Indiana, when asked, to say, ‘I know about the White River,’” said Brenda Myers, president and CEO of Hamilton County Tourism. “Through awareness we can create positive change. It’s really important. This is not going to end in April when the final report is brought out for public input.”

The next public meeting is set for 6 to 8 p.m. Oct. 23 at Founders Park, 11675 Hazel Dell Parkway in Carmel. Attendees will have the opportunity to give input on the plan designs, express concerns and ask questions. 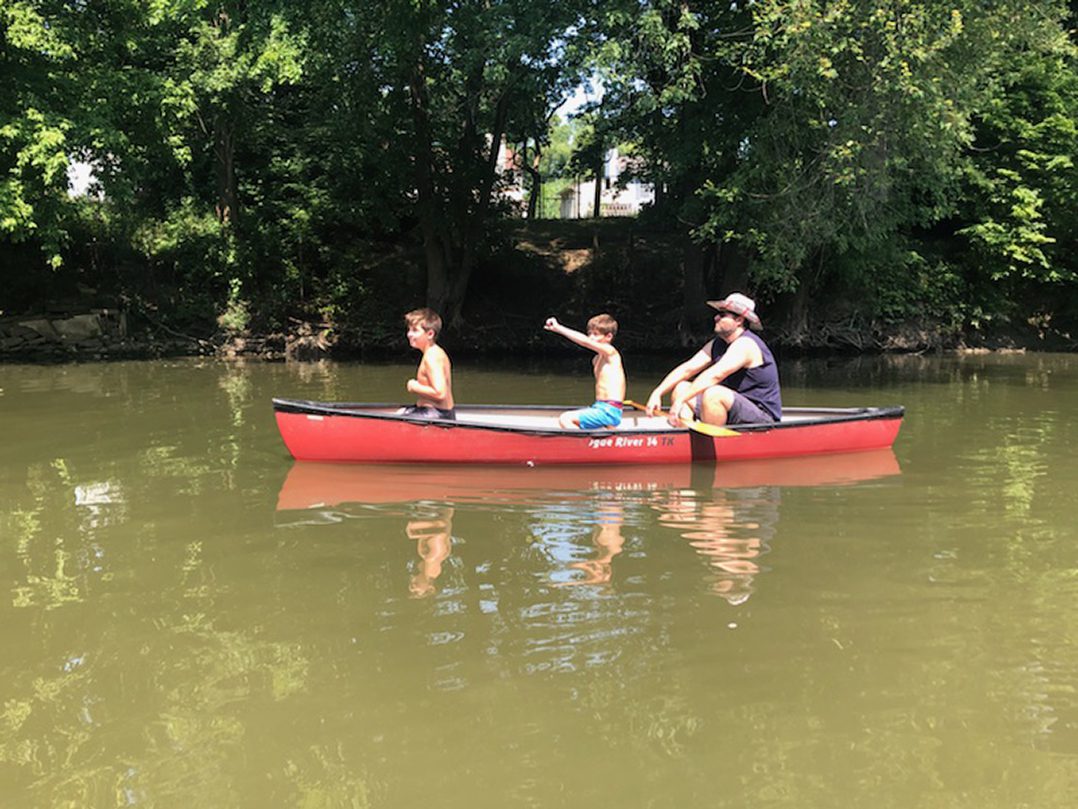 While many things can be done to improve the White River, much progress has been made in previous decades.

A century ago, the river experienced “pig jams” when meat producers would throw hog carcasses in the river after removing the parts they wanted, according to Cliff Chapman, executive director of the Central Indiana Land Trust, which works to preserve land along the river and elsewhere.

“You could walk across the river on the bloated carcasses of pigs,” Chapman said. “It ain’t that bad anymore.”

The river may no longer be full of pigs, but other hazards have caused ecological devastation and contributed to a negative reputation. Most notably, in 1999 a chemical spill near Anderson led to a fish kill, and other pollutants at times led to officials to urge people not to make full body contact with the water.

Even now, in Indianapolis, sewage overflows into the river when it rains more than a quarter inch. The $2 billion DigIndy project is creating a 28-mile tunnel system deep underground to nearly eliminate the problem. In Hamilton County, where most development occurred more recently than Indianapolis, modern designs have kept the problem to a minimum.

But for years now in both counties, the White River has been deemed a safe place to enjoy outdoor recreation.

“One of our group’s goals is to re-engage people with the river,” said Lance Lantz, a member of the White River Alliance board of directors. “It seems like it’s almost a hidden treasure. Those who know it’s there enjoy it, but most of us drive (over it) across the bridges and don’t think twice.”

In addition to the DigIndy project, other major projects are in the works along the White River, such as the transformation of the former General Motors stamping plant in downtown Indianapolis to a $550 million mixed-use project. Conner Prairie, which borders 3 miles of the river, is in the process of completing a master plan that includes using the water to provide education about Indiana history.

Myers said it seemed like a good time to launch the White River Vision Plan with so many organizations already focusing on improving the river. The plan doesn’t seek to replace the work that’s been done by other groups; rather, it aims to unite organizations that are already working toward the same goals.

“We see ourselves as the convener on the project,” Myers said of the Carmel-based Hamilton County Tourism. “We’re sort of shepherding the collective.”

Other partners include the White River Alliance, Friends of the White River, Reconnecting Our Waterways and more. Massachusetts-based Agency Landscape + Planning is consulting on the project. The project costs $1.5 million and is funded through several municipalities, Legacy Fund and a grant from the Nina Mason Pulliam Charitable Trust.

The partners have different focus areas, but all are committed to helping the White River reach its full potential.

“We have this amazing resource going right through our community,” said Claire Lane, an urban conservationist with the Hamilton County Soil and Water Conservation District, a project partner. “It’s really a shame to not utilize it and make it a big part of peoples’ lives and respect that this is an awesome asset we have.” 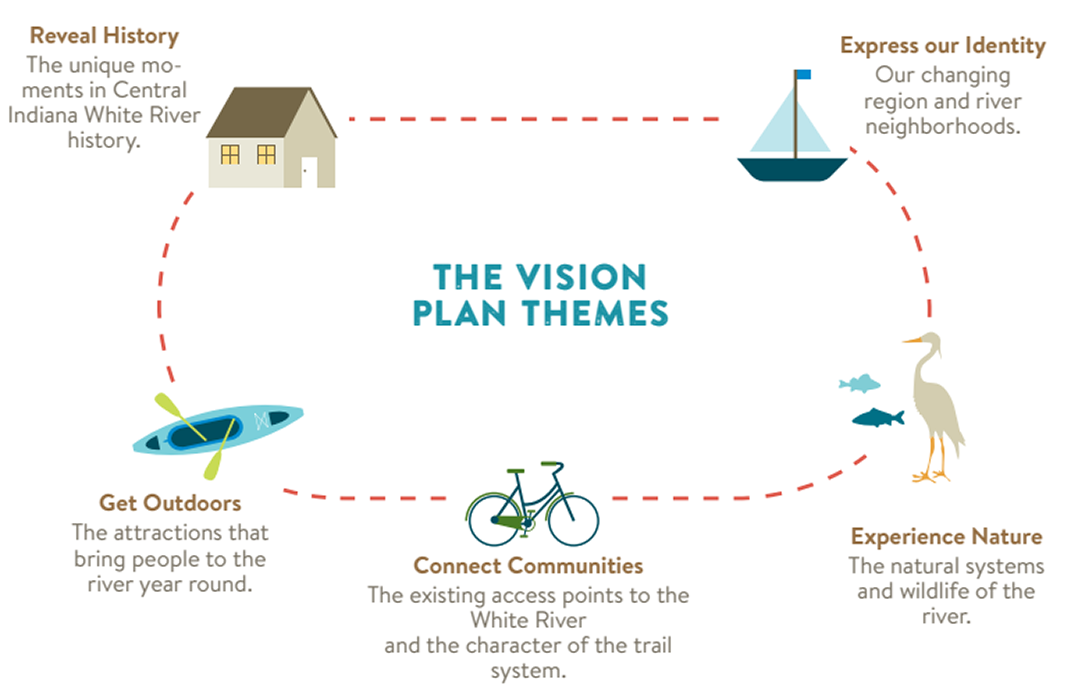 Not only does the White River Vision Plan aim to clean up the river, but it is exploring ways to increase access and attract development.

“We’re always looking for more family activities to get the average person to realize the fun there is to be had on this great recreational opportunity,” Lantz said.

At the same time, the group is cognizant of the fact that many private landowners don’t want to see big changes.

Ed Shaugnessy, a Carmel resident who enjoys fishing and kayaking on the river but doesn’t live on it, is also hoping that the vision doesn’t lead to drastic changes.

“I hope they go with caution,” he said. “I don’t want to see a lot of restaurants and bars and businesses spring up on what’s now quiet and peaceful.”

“The section between Noblesville and Carmel is one of the best-kept secrets in Hamilton County.   It’s an easy day float of four to six hours depending upon the water level, and for the most part you’d never know you were floating through suburbia.” – Joe McDonald, Indianapolis

“I’d love to see more/easier access points to be able to easily take my kids down to kayak, canoe or even just splash around.” —Amal Anthony, Carmel

“Kayaking White River, especially north of 96th Street, is a lovely way to spend an afternoon. It’s a leisurely paddle and you get to see all kinds of wildlife. I would love to see a few more public access sites between Strawtown and the downriver Hamilton county border. Since we live in a mostly landlocked state we need to do more to protect our very few navigable rivers.” –Mark Miller, Carmel

“It needs to be cleaned up. I couldn’t believe I saw people in tubes floating last summer.” —Kristin Robbins, Carmel

“We love spending time at River Road Park and walking along the foot paths under the old-growth trees next to the river (also love Holliday park access to the White in Indy). I would love to see it cleaned up a little more so we could feel 100 percent comfortable canoeing /kayaking/rafting down it.” –Carolyn Martens, Carmel

The boat launch at Carmel’s Hazel Landing Park is being used as inspiration for a new White River access point at Oliver’s Woods, a 53-acre nature preserve near Keystone at the Crossing in north Indianapolis, according to Central Indiana Land Trust Executive Director Cliff Chapman.

Oliver Daughtery left his property, which includes a mile of frontage along the White River, to the land trust upon his death in 2009. It is planned to include walking trails and mountain bike trails among the woods and prairie-savanna restoration areas in addition to the boat launch.

The site is expected to open to the public in the spring of 2020.