Fishers residents will have a chance to take a step back into the city’s history when the Fishers Police Dept., Fishers Fire Dept. and Nickel Plate Players will put on a historical re-enactment of the Battle of Mudsock.

The Battle of Mudsock took place in Fishers Nov. 19, 1881, when, following an altercation, patrons from two rival saloons got into a brawl that injured 30 people and killed two. 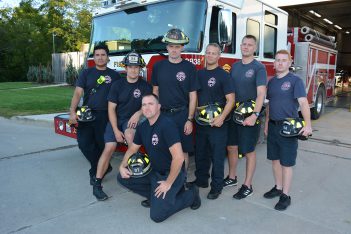 Fishers Police Dept. Officer Robert Bowling, who wrote the re-enactment script and will portray one of the characters, said Fishers in 1881 was known as a lawless railroad town where people loved to drink.

“Basically, what happened is it started about noon on Nov. 19, and there was an argument between two guys at a bar,” Bowling said. “The first big fight took place in Andy Farrell’s saloon. Someone from Wade Hampton West’s saloon came over and made an insult and a fight broke out, got his butt kicked and (was) kicked out of the bar.”

Upon returning to the bar, patrons informed West about the incident and the pair returned to Farrell’s saloon.

“Wade Hampton West got into a fight with Benjamin Fouch, one of the principal characters of the other saloon. Benjamin puts on a pair of brass knuckles and starts pummeling (West) in the face,” Bowling said. “Someone pulls Benjamin off and West runs out of the saloon and goes back to his bar. You think that’s the end of it.”

Fouch, however, goes to West’s saloon and hurls an insult. Patron Bob Dawson responded with an insult, and another fight broke out.

Approximately 30 people took part in the brawl. At one point, West struck Fouch with a brass faucet and killed him. After the fight, Farrell and his brothers got into an argument that sparked a gunfight that continued throughout the night. 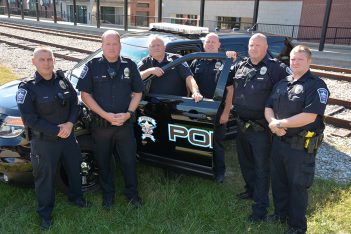 Fishers police and firefighters will portray characters from each saloon. The re-enactment will be 3 p.m. Nov. 10 at the Ambassador House, 10595 Eller Rd. Gates will open at 2 p.m. and house tours will be offered from 2 to 3 p.m. Tickets are $12 online in advance or $15 at the gate. Proceeds will benefit the Fishers Fire Foundation, the Fishers Police Foundation and the Historic Ambassador House.

The Ambassador House had originally scheduled county historian David Heighway to speak on the battle in November. Marj Sparks, an Ambassador House board member, brought up the possibility of putting on a historical re-enactment instead.

“We were talking about our purpose, which is education, community and history, and we had scheduled David Heighway to come talk in November on the Battle of Mudsock, and I just spoke up and said we should re-enact that, so that is how it took off,” Sparks said. “It’s become a big benefit, so it’s really exciting that the police, the fire and the Ambassador House are all going to benefit from this.”

Food and drinks will be available for purchase. Parking is free. For more or to purchase tickets, visit battleofmudsock.com. To sponsor or contribute, contact Sparks at (317) 903-9879.

More than a football game

FPD Officer Robert Bowling said most people think of the annual football game between Fishers High School and Hamilton Southeastern High School when they hear about The Battle of Mudsock.

“The name ‘Battle of Mudsock’ is actually derived from this battle,” Bowling said. “It’s interesting to note that we were only a town for nine years when this occurred, so our population may have been 100-some people. Fishers had a unique history. It was a railroad town, and that’s the reason it became a town. Because of that it, brings in lawlessness. Drifters come into town on the trains, and because there are so many saloons, fights break out.”

The Battle of Mudsock made national news, generating headlines as far away as New York and Texas.