You are at:Home»Current in Geist»Geist Community»Lawrence police search for bank robbery suspect

The Lawrence Police Dept. and the FBI are seeking information from the public to identify a bank robbery suspect, who robbed the Chase Bank at 42nd Street and Franklin Road at 4 p.m. Nov. 29. 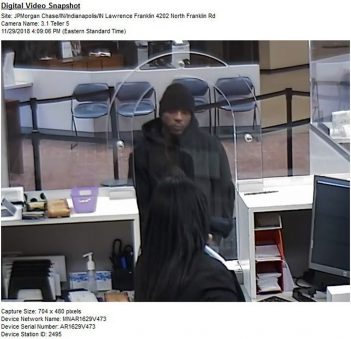 The Lawrence Police Dept. and the FBI are seeking information on this man, who is a suspect in a bank robbery which occurred Nov. 29. (Submitted image)

The suspect is described as a male wearing a dark hooded sweatshirt, blue jeans and white shoes. He is less than 6 feet tall and in his mid-20s to early 30s with a thin to medium build. According to a press release from the LPD, the suspect entered the bank, approached a teller, and verbally indicated he had a firearm. The suspect then demanded cash.

After receiving an undisclosed amount of cash, the suspect fled on foot to the north. There were no injuries.

For those who may recognize the individual or anyone with information about the robbery, contact Crime Stoppers of Central Indiana at 317-262-TIPS or visit crimetips.org to use the “submit a tip” button at the top of the page. The public also can submit an anonymous tip by smartphone on the Crime Stoppers mobile app.