You are at:Home»Current in Noblesville»Noblesville Cover Stories»Looking Ahead: Big projects shaping downtown Noblesville in 2019

In the past few years, the City of Noblesville has increased its investment in downtown projects. From streets and alley enhancement to placemaking projects to business attraction and housing, city officials say the initiative will continue into 2019.

Four project areas are at the top of the list in the new year – placemaking, housing, infrastructure and parks and trails.

“This year, the public will see work being done on five to six of the 10 Noblesville NOW Capital Improvement Plan projects that we announced back in July,” Noblesville Mayor John Ditslear said. “While not every one of these will be completed in 2019, work will be under way now so our residents can reap the benefits sooner. These projects, collectively, better manage our growth as a thriving city and will help relieve traffic congestion, improve connectivity via roads and trails and introduce multi-family apartments to downtown.” 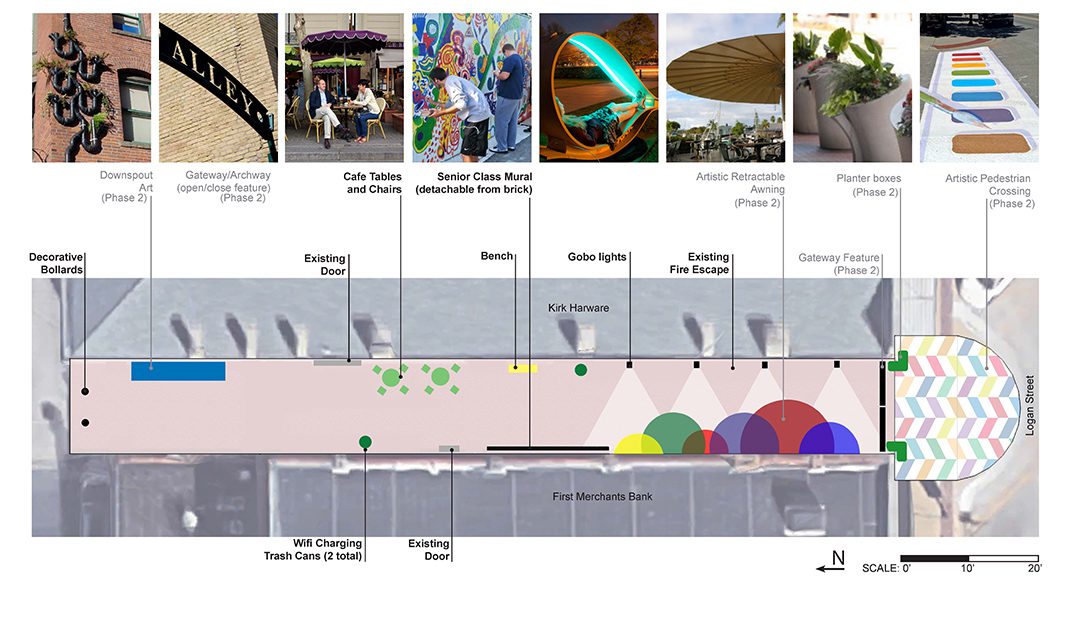 The city announced its plans for alley activation downtown in 2018. The first alley to be transformed is the north alley on the square. (File rendering)

“First of all, we will move Alley Activation forward,” McGill said. “As soon as the weather allows, we will be closing the north alley and installing lights, tables and more. More artistic elements also will be added to the north, east and south alleys throughout the year.”

McGill said another area of focus will be on signature events.

“We have targeted six events over the course of the year that the arts council will invest resources into to increase their effectiveness and impact,” she said. “The arts council will help boost the marketing for these events, coordinate special experiences at the Noblesville Cultural Arts District booth at each of these events and collect feedback from visitors, among other things.”

In 2019, McGill said the arts council will work to improve its reach through marketing and improving the website. Several public art projects also will move forward.

“We will be creating at least two murals on buildings in downtown Noblesville in 2019 and exploring opportunities for whimsical engagement of pedestrians throughout the downtown core,” McGill said.  “If time and money allow, we will also update the Noblesville art (streetlight) banners with new images.”

“Per the recommendations of the plan, the Downtown District Committee has approved changing the streetlights, benches, trash containers, bike racks, etc., from green to black,” said Caleb Gutshall, assistant planning director for the city. “The first phase of the project will focus on the infrastructure around the courthouse square and subsequent phases will radiate outwards from there. The city is currently working with Duke Energy to ensure all changes are consistent and seamless.”

“The idea is to decrease the clutter caused by the current placement of the banners and flowers by creating a strategic guide for placement, design and quantity,” he said. “There (also) has been discussion about pavement improvements around the Public Safety Building to improve safety and create a consistent appearance, which is strongly recommended in the Streetscape Master Plan.”

In addition to these changes and enhancements, Gutshall said the committee is looking at improving design standards for the downtown district as well as the creation and improved consistency of wayfinding signs downtown.

A $24.3 million, five-story housing, retail and parking project is set to start construction in 2019.

Construction will cause some parking changes during construction.

“With the construction of The Levinson beginning this spring, the Parking Task Force will be regrouping and announcing plans to address the temporary loss of a city parking lot and changes with current parking meter technology,” Ditslear said.

In addition to the apartments, parking and retail space, the project also will have a 2,000-square-foot lobby along Eighth Street that will include a public exhibit of

downtown Noblesville history. The entire building will be two levels below ground for parking and five levels above ground for the apartments, more parking and commercial space.

Noblesville began its 15-year Long-Term Control Plan in 2007 with plans to complete the work in five phases.

“Phase 5 of the city’s LTCP removes unwanted stormwater from the sanitary sewer system,” Noblesville Utilities Director Ray Thompson said. “We will be starting the design in 2019. However, the city does not anticipate any construction beginning until 2020. The coverage area of Phase 5 will be south of Vine Street, but mostly the Southwest Quad area. This could change or increase as we get further into design.”

Construction of the federally mandated phosphorus project will be completed this winter.

“Phosphorus is a nutrient that passes through the typical treatment process and now must be targeted and removed,” Thompson said. “We know that part of removing phosphorus is an increase of bio-solids disposal. We will start 2019 with a study to determine what the best method of disposal or recycling may be as well as determining what additional benefits may be gained from the methane gas byproduct. Based on these findings, we will begin design.”

Although work will begin in 2019, Thompson said construction is not expected to start until late 2020 or early 2021.

Construction began in 2018 on the Logan Street Pedestrian Bridge and will be complete in 2019.

A joint project with Hamilton County, the pedestrian bridge will be built along the

Commons. The county is paying for approximately half of the project’s $3 million cost. The bridge is set to be complete in late summer.

Nearby, the city will complete Phase 4 of the Riverwalk, which stretches from Division Street to Southside Park. The section will be completed in 2019.

“Forest Park Inn will be renovated to accommodate staff growth with additional office space,” Hoffmeister said. “We also will have a small renovation of the Carousel building due to the parks department taking over the historic carousel and Tom Thumb Miniature Golf Course.”