You are at:Home»Current in Westfield»Westfield Cover Stories»Standing strong: Westfield grad Ben Littrell works to recover from brain injury, inspires perseverance in others

Although the prognosis for people with traumatic brain injuries differs from patient to patient, Ben Littrell seems to have exceeded all expectations since being struck by an SUV in February 2017.

Now, the 2012 Westfield High School graduate is striving for even greater progress while inspiring others at the same time.

Littrell, 25, has made physical strides and uses the accident as a means to spread messages of faith and perseverance in hard times.

“You have to fight through the good days and the bad days,” he said. “I just see what happened to me as God redirecting me.”

Before the accident, Littrell acknowledged that his primary motivation was his career and money. Prior to his injury, he was a territory manager for a health sanitation company.

“I was first just focused on money and what I could acquire, and those things are great in this life, but what’s that really going to do for me in the long haul?” he said. “Now, it’s about how can I serve others and help my community?”

At the time of his accident, Littrell was living in Raleigh, N.C. and was visiting a friend in Charleston, S.C. He was struck by the SUV while trying to cross a street where a sidewalk was under construction. He didn’t see the SUV because of poor visibility where the construction sign was placed.

Littrell suffered a broken right leg, a broken right shoulder and a basal ganglia hemorrhage, or brain bleed, which put him in a coma. The injury severely damaged his ability to function physically and impaired his cognition and memory. Ben’s father, Paul Littrell, said his son’s immediate prognosis was, at best, grim.

“His prognosis was basically he may never walk again. He’ll probably need some sort of assistance the rest of his life, and we don’t know if that’ll be 24-hour nursing care,” Paul said. “The primary goal is to get to no need for 24-hour nursing care.”

Suffice it to say, Ben Littrell beat the prognosis. He can walk, doesn’t require 24-hour care and returned home to Westfield nearly four months after his accident.

Littrell is already working on his next objective.

Littrell also hopes he can drive again at some point. He isn’t afraid to work hard to accomplish his goals, and his work ethic is something Lydia George, a physical therapist with the Neurorehabilitation & Robotics Clinic at IU Health, has seen firsthand.

“Ben is extremely resilient,” she said. “He is such a hard worker. He is so positive and is willing to accept any challenge, and he wants therapy to be challenging and he wants it to be hard, and even if it’s frustrating for a minute, he looks at the big picture and keeps moving on and challenging himself.

“It’s so fun to work with him because he’s willing to work hard and have a positive outlook.” 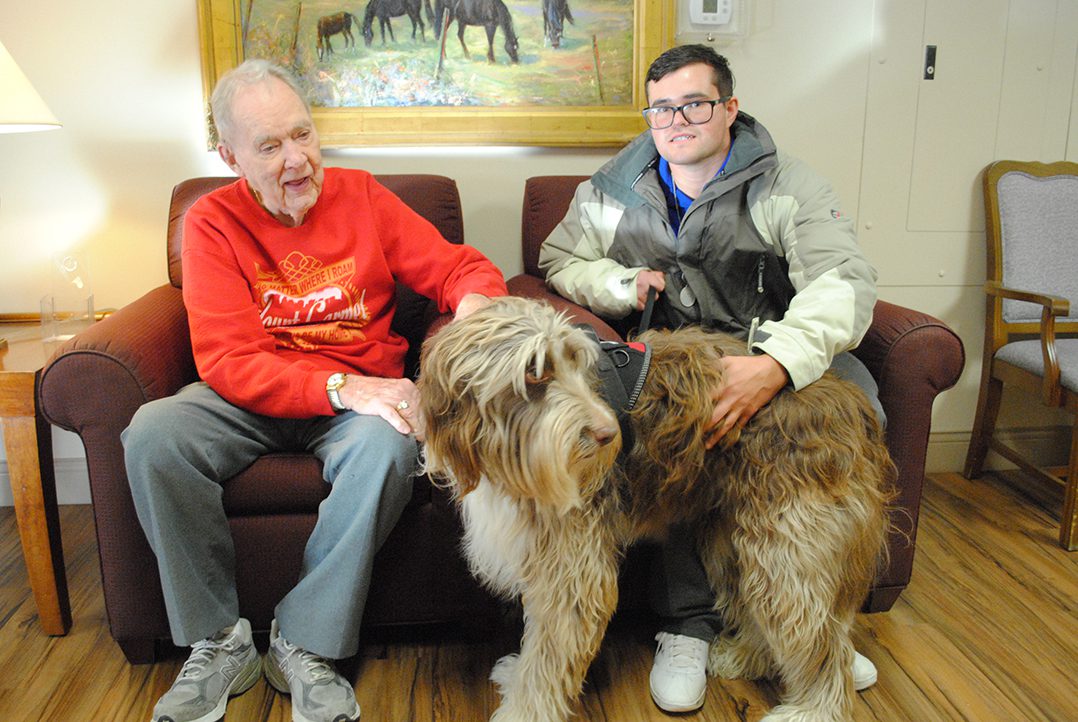 While Ben Littrell was hospitalized in a coma, a therapy dog visited his room.

Littrell doesn’t remember the story, but his parents told it to him when he woke up. The dog licked his hand, and the dog’s handler said the dog has never done that before.

Now, Littrell is going through training with his Australian shepherd poodle mix, Max, to receive certification to take Max into hospitals as a therapy dog.

“I’ve always wanted to have a therapy dog and my mom has always wanted a dog that she can do that with, and Max is perfect for it,” Littlrell said. “He’s very calm. He loves people.”

Littrell purchased Max three weeks prior to his accident when Max was only 8 weeks old.