You are at:Home»Current in Geist»Geist Cover Stories»On the go: New bus line to increase transportation options for Lawrence residents

Greater Lawrence Chamber of Commerce President Trace Yates understands the importance of connectivity and how it relates to economic and community development, which is why IndyGo Project Development Planner Austin Gibble presented on the new IndyGo Purple Line at the chamber’s May 9 Breakfast Connections event.

The Purple Line is a bus rapid transit service that will travel from downtown Indianapolis to 38th Street, then cut across to Post Road, where it will complete it’s route in Fort Benjamin Harrison in Lawrence. Stations will be spaced between one-third of a mile to 1 mile apart. There will be 30 total stations, with 22 two new ones. Eight already exist. The Purple Line will stretch 14.6 miles. 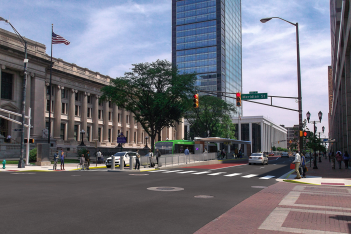 A rendering of the IndyGo Purple Line route through Indianapolis. (Submitted photos)

“BRT lines get a lot of attention because those are the shiny new, fast-transit systems, but it’s a lot of things,” Gibble said. “It takes all the elements of light rail, (such as) the stations, boarding, ticketing, but then you take away the tracks. It functionally operates that same way. It’s fast, has dedicated lanes, and these allow them to operate in a really high form of reliability because it’s not affected by traffic.”

Gibble said construction on the Purple Line should begin in 2020 and be complete by the end of 2021 or early 2022.

Gibble said the buses will arrive in intervals of 10 minutes or less.

“It’s comfortable. It takes all the elements of a rail service and applies it to a cost-effective bus,” he said.

“The Purple Line has so much added value with infrastructure,” he said. “Post Road has no sidewalks, no drainage, and that’s part of why 38th Street is so bad. The Purple Line will add 6.5 miles of continuous sidewalk on 38th Street and Post Road.”

Gibble said nearly half of the Purple Line’s $140 million cost will go to infrastructure improvements, such as curbs, drainage, sidewalks and resurfacing. The rest will be spent on right-of-way acquisition and transit construction.

Gibble said the Purple Line is expected to increase the amount of accessible jobs by 4,300 percent.

“It’s a dramatic improvement to that kind of accessibility and connectivity,” he said. 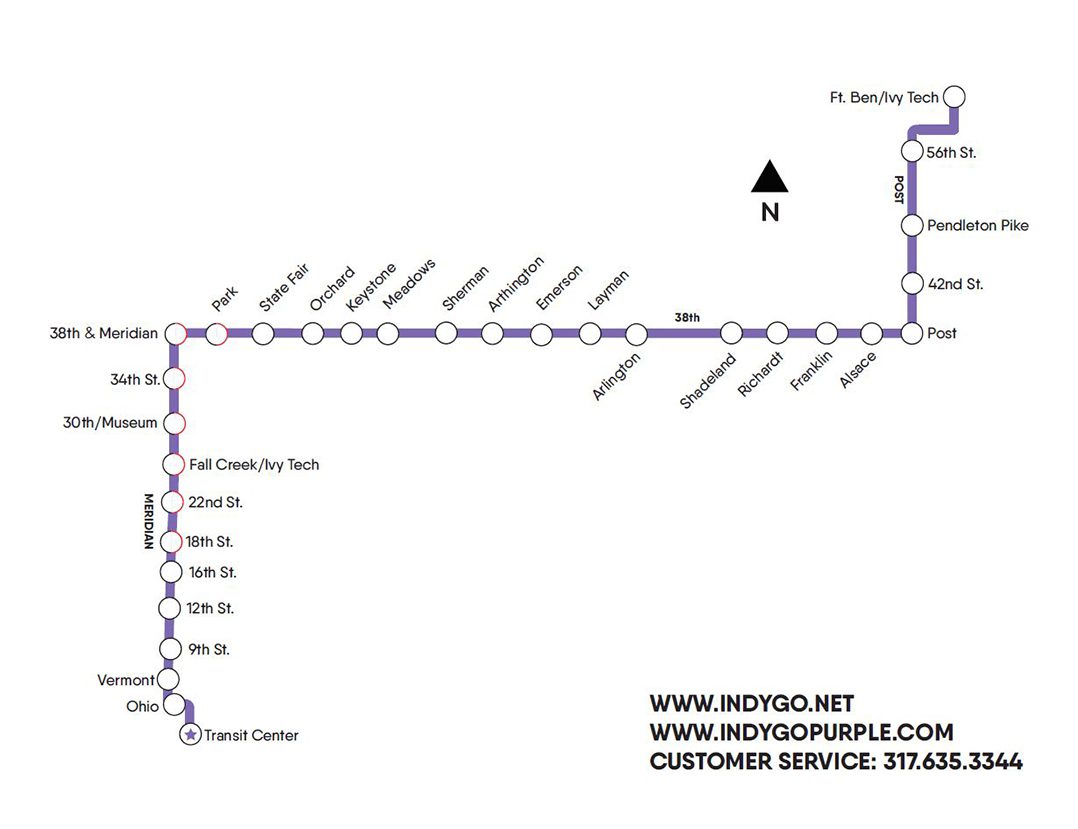 A map of the IndyGo Purple Line route. (Submitted image)

Greg Hahn, a partner at Bose, McKinney and Evans, which sponsored the Breakfast Connections meeting, spoke prior to the presentation. In terms of public transportation, he said Marion County is far behind what it should be.

“We are very pleased to be part of this. We have had a long connection with Lawrence, with the city and city council and redevelopment commission,” Hahn said. “The Red Line is moving right along and opens Sept. 1, so we feel good about that, and of course the Purple Line is started. The dedicated lines are part of the mobility we are trying to do in Marion County. We are behind the ball, so to speak. We have a lot of other communities our size and even smaller (with better transportation).”