In its second year, the Indy Shorts International Festival has received a significant bump.

“Our submissions grew from 2,300 last year to 3,100 this year,” said Greg Sorvig, director of film programming for Indy Shorts and the Heartland International Film Festival. 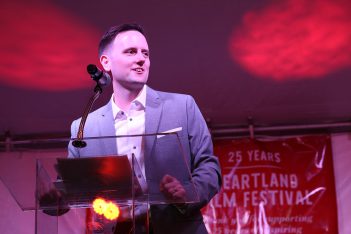 There will be 152 films at Indy Shorts Festival, which runs from July 25-28 at Newfields at the Indianapolis Museum of Art. Films in Indy Shorts are Oscars-eligible for 2020, while those films shown at Heartland Film Festival in October aren’t eligible until 2021.

Sorvig, a Carmel resident, said it was Heartland President Craig Prater’s initiative to create Indy Shorts as a separate event.

“We’ve had great leaders in the past at Heartland but people that didn’t necessarily have wide-ranging industry experience,” Sorvig said. “We’ve really put the pin in the map instead of a flyover state/festival. People are really starting to pay attention.”

Heartland is now nearly all feature films. Short films are 40 minutes and under.

“It’s great to network, see films and spread the message and hopefully see some of those people in July and October,” he said.

Tribeca, which was founded by actor Robert De Niro, had a record number of submissions and officials called on Sorvig for help in December 2018.

“I’m just one of a handful of screeners worldwide for Tribeca on their screening team for short films,” Sorvig said. “They have a lot of Oscar nominees. I get to be on their team in addition to what I do for Heartland in a leadership role. I was invited to come back again, and I’ll be doing that as long as they will have me.”

Sorvig has been a jury member for other film festivals and a panelist at major industry conferences.

“I was honored to be a panelist for the National Endowment of the Arts in December,” he said. “There were 30-some people who get together and reviewed applications for funding at a federal level. You look at budgets, impact. I looked over 30 different proposals for funding.”

Sorvig completed the Hamilton County Leadership Academy training in 2018. His wife, Rachel, is a 2019 HCLA graduate.