You are at:Home»Current in Noblesville»Noblesville Community»Noblesville’s BeeFree included in Indiana Grown marketplace at Fair

“It’s a great event and great way to showcase our Indiana Grown products and introduce it to a lot more Hoosiers,” Wiese said. “It’s a great showplace for us to get our product known. We will do tastings there as well, so people will have a chance to taste it before they buy it.” 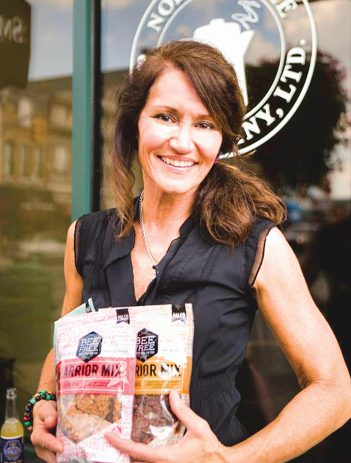 “It’s made with simple ingredients and made in chunks so you can eat it with your fingers,” the Noblesville resident said. “It’s a great snack for fairgoers to pick up while they are there visiting. You can tear it up and eat while you are at the fair.”

Warrior Mix is available in grocery stores locally and nationally. There is a store locator on the website, beefreegf.com

Heather Tallman, Indiana Grown’s program director, said the marketplace is in its third year and is poised to be bigger and better than ever.

“With over 500 products from at least 100 Indiana Grown members, visitors can become a culinary tourist while shopping from farmers, producers and artisans from all across the state,” Tallman said. “In addition to the marketplace, attendees can sample from Indiana Grown members daily, learn more about Indiana Grown programs like the Indiana Grown for Schools Network and find members in their area on two large touch-screen computers.”