He knows their room number, he knows their name and he knows roughly how long they have to live. Yet, Tom Schemmel introduces himself to veterans at the Roudebush VA Medical Center as a candy striper without a skirt.

“The way they smile and laugh. Some will say, ‘Well, go get a skirt!’” Schemmel said.

Schemmel, a representative for the national VA veterans service for the Roudebush VA hospital and clinics, and others from The Knights of Columbus Council in Zionsville, visit veterans at the Roudebush VA Medical Center in Indianapolis as a part of the national Serving Those Who Serve veterans program to assist the men and women who served in the United States’ military branches any way they can.

Schemmel and his group from Zionsville, which includes veterans and non-veterans, logged 842 volunteer hours in its first year participating in the program (2016). The following year, the group logged 2,220 volunteer hours and has maintained that rate since.

Schemmel , a U.S. Army veteran, was stationed in Vietnam in 1963. He was unable to contact his wife for eight months. He flew back to the United State at the end of the year, but while catching a connecting flight in Hawaii,  he was cautioned not to return to American soil wearing his uniform.

Schemmel did not understand why until he spoke with some of his military friends who reported they were spit on and cursed at when they wore their uniform on arrival. But the impact of the war did not stop there.

“The thing that upset me so much was that my fellow veterans were coming back from Vietnam and 20 a day were killing themselves, suicide,” Schemmel said.

Schemmel recalled that for years, Vietnam veterans were disrespected and often referred to as “baby killers.” But he and other veterans have fought to change such perceptions by actively celebrating the lives and sacrifices of veterans. Conducting fundraisers for veterans is one of the way he and his group helps.

One of the group’s recent fundraisers was a charity polo match, dubbed “Polo at Sunset,” July 19 at Hickory Hall Polo Club. Proceeds benefitted the United Service Organizations of Indiana and veterans programs, such as Schemmel’s.

Schemmel now visits the VA medical center to serve veterans under palliative care  who do not have much time to live. He was specifically assigned to the role because he, in the eyes of VA officials, demonstrated a natural sensibility for the solemn task.

Most veterans thank him for his time and appreciate the group’s efforts.

“Basically, I’m talking to myself. I’m hoping they hear. I don’t know. And I spend time (with them).”

“There are some people who have no one else, and no one should die alone,” said Geri Neita, director of communications at St. Alphonsus Liguori Catholic Church in Zionsville,  where Schemmel’s Knights of Columbus Council are based. 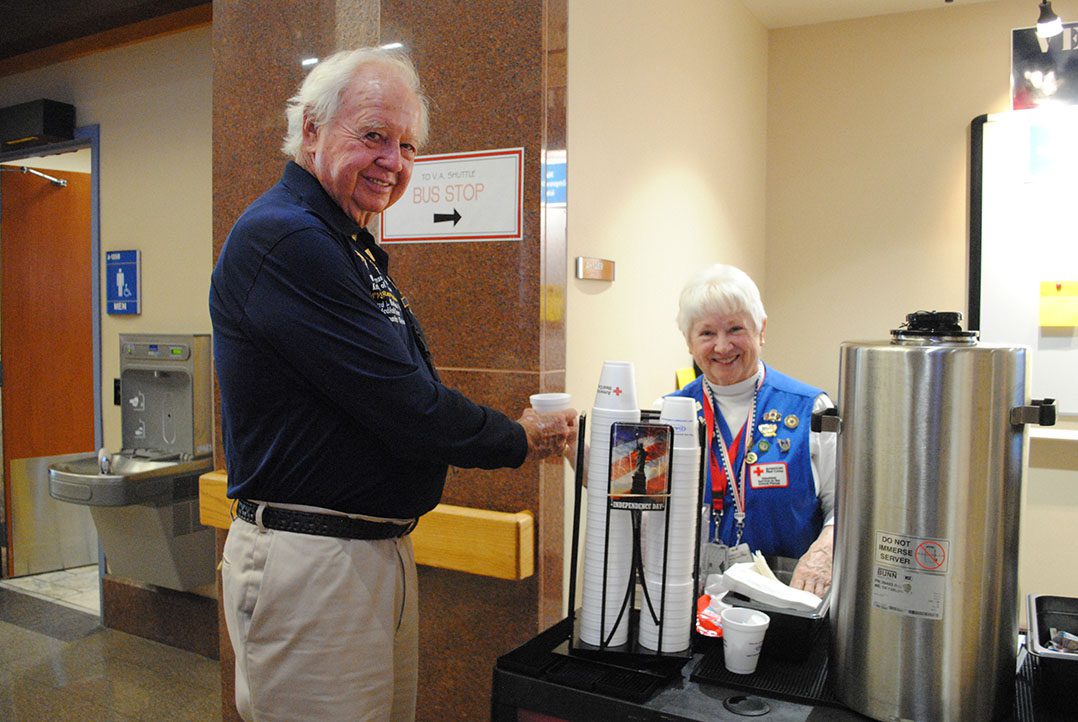 A year ago, Schemmel visited a veteran who was unable to respond. During the visit, a chaplain came in. Schemmel took this as his time to leave, so he explained to the patient that the chaplain would pray for him, that he needed to go and he thanked him for his service.

As Schemmel was leaving, a nurse approached him. She said the veteran had opened his eyes and was attempting to follow him. Schemmel returned to the room to thank the man for his service again, but the veteran could only meet his words with a silent gaze. He was unresponsive otherwise.

Schemmel left the hospital knowing the chaplain and the nurse were there to treat the man, but in time he began to think about the patient. One day Schemmel called someone he knew at the hospital to ask about him. They informed him the man died later that afternoon.

“How does it affect me?” Schemmel said. “I just say, ‘Thank God for the opportunity.’”